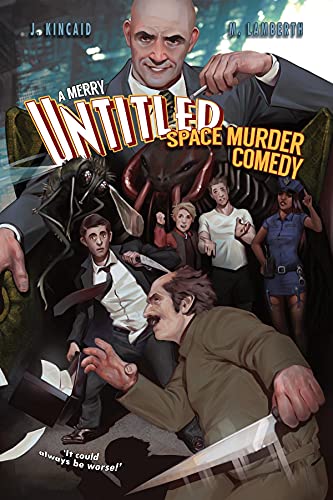 The future is grim on a distant planet, urbanized to the brim with massive skyscrapers and corporate-run districts. Ripe with inequality, the classes exist in literal separate tiers. Ascension is everything.

Harold, an unsavory factory worker, seeks a solution to his financial woes and dissatisfaction with life. The Syndicate has offered him the deal of a lifetime, but it comes at a heavy price. All he has to do is kill one man. It shouldn’t be that hard, but innocent people just keep getting in the way. Now the lives of his family are on the line as he finds himself caught in the demented games of a xenophobic cult.

Hopefully, his son Thomas can finish the job before the detective gets her hands on him. Harold will have to enlist an army of aliens, vagrants, and prostitutes if he wants to survive. He just has to confront his own prejudices and selfish desires first. It’s only a matter of time before Harold realizes that the enemy of your enemy is not always your friend.

From a small Texas town to a big-city high-rise and everywhere in between, J.B. Kincaid has done it all. You will often find him hiking out in nature with his wife Katie and their highly energetic labradane Crichton (named after the Farscape character), He is also a prolific rock musician and the frontman of the grunge band Social Hazard. He has two bachelor’s degrees from the University of Texas at Austin in government and anthropology, he has a master’s in management of technical education from Texas state, and he has a Juris Doctor degree from the Texas A&M School of Law. He’s had a wide range of careers including; a high school science teacher, a real estate professional, a law clerk, a production technician, and later line adviser at Caterpillar. He has owned his own oilfield trucking company, an independent record label, and a dispute resolution firm. He is currently writing non-fiction political science books and science-fiction novels.