Pin It
You are here: Home / Book Reviews / A Promise Apart

I Felt Their Pain. It’s always a gift when an author writes a novel with characters so developed that you not only empathize with them, but you feel their pain and struggles. Yes, there are some graphic scenes in this novel, but the author did a great job with trigger warnings. Those scenes were crucial to the plot, and not gratuitous in nature. I loved Sam, and I enjoyed the humorous banter between the characters. It was a very enjoyable journey! -Amazon Review 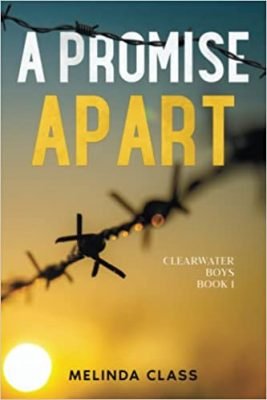 Everyone deserves a second chance… but what about a third?

Will Black blew his chance at romance with Samantha at eighteen.

Then his second attempt to declare his love at twenty-one went up in smoke before flames could even ignite. Seven years later, his life explodes, literally, leaving him injured, scarred, and ending his career in Special Forces.

Where do you go when you have nowhere else to go?

Samantha Janson had experienced more than her share of loss and heartache by the age of twenty-one.

She soldiered on, though, carving out the life she’d always wanted. Now that life is unraveling, and it’s taking all of her strength not to fall apart with it.

When Will Black -who coldly abandoned her in her hour of need seven years ago- shows up to play hero, she is leery to accept his support but too desperate to turn it away.

But some old wounds never heal, and some old flames never die…

Having him protecting her and her son may be more of a hindrance than a help when she needs to concentrate on fighting the enemy who’s endangering her entire world.

Can Will & Sam finally get it right, or is the third time not the charm after all?

This was a great read. The characters were really well written and really draw you in! Looking forward to more from the author!  -Amazon Review

Melinda Class Accountant by day, writer by night. (Well, at least the night hours after her kids go to bed and before her husband rolls over and scolds her for still being on her laptop at one in the morning.) Melinda Class lives in the southern pines, down a dead-end, dirt road which suits her introverted self just fine.

After reading an average of one book a day for almost two years straight, Melinda decided while sitting in traffic that she would write a book with every aspect she liked from the romance books she was reading and none of the stuff that had her wanting to the throw the books across the room. Fifteen minutes later after listening to some great eighties/nineties country music and ordering herself a half sweet/half unsweet tea at Sonic, she had her first four-book series planned.