Better Lands came highly recommended and I agree this book is one that is hard to put down. The characters are so well developed with such great articulation by the author. A great suspense series…. can’t wait for the next book to launch. – Amazon Review 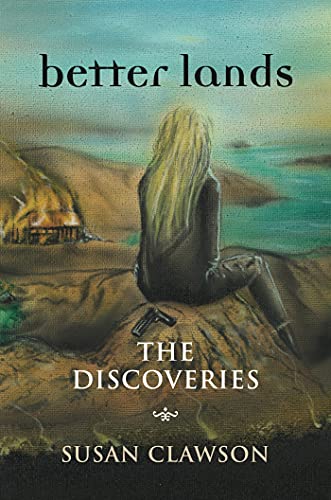 “better lands: The Discoveries” is the first in a five-book series about a tempestuous 45-day foot journey from Burlington, Vermont to Kentucky during a pandemic that had wiped out over two-thirds of the earth’s breathing population. Technology was at best, sporadic, while buildings and vehicles were subject to mandated burn orders as survivors tried to control the virus. ‘The Discoveries’ will take the reader, along with the travelers, from Burlington, Vermont through Fort Drum, New York, the first inside shelter stop along the way.

In the Spring of 2023 a new world was evolving from the chaos the three-year pandemic had already bestowed upon it. After losing her parents, home and privileged life, 15-year-old Rosa Wells continued to live in the Chuso home until she felt her life was threatened. She had no choice but to leave and head out into a world she had been tightly sheltered from, only to be taken back by the impact and devastation the virus had caused. She finds herself a refugee in a tent community along the shores of Lake Champlain in Burlington Vermont, where life takes a drastic turn for her.

During that time, four de-patched motorcycle club members migrate to the area from Montreal, Canada and cause chaos among the survivors. They harass them and steal their supplies as well as attack the campsites when least expected. Rosa, single handedly, challenges them when they try to assault some of the community survivors. She soon becomes a respected leader among them for doing so.

A third wave of the virus was headed toward the U.S.. Rosa decided to spend some time in the local library, checking out an area in Kentucky that was rumored to be virus free. Eventually, most of the tent community members asked to go with her so Rosa began to plan a large migration to the better lands.

As cold weather arrives, the survivors move to nearby shelters, inside a few disinfected buildings. During that time Rosa welcomes Darcy and Jean-Pierre, two teens from Stanstead, Canada, to join them. Shortly afterwards, an unexpected street thug also joins the survivors. Rosa’s decision and motives are questioned for letting him in, but she quickly gains their confidence back as the thug starts to gain their respect.

By the Spring of 2024, four teams of 100 are chosen to make the first 45-day foot journey to the better lands, hoping to get there before the next wave hits. Each team trails a week behind each other and experiences many ruthless encounters along the way. Just a week after leaving Vermont, Rosa’s team is the first to arrive at the Fort Drum Army base, the first of the five inside shelters along the journey. There they find an inside sanctuary, away from all the burned rubble that continuously fills the air, making it hard to breath along the way.

They befriend Sergeant Fleshman along with Privates Stone and Hansen, who continue to welcome the next three teams. They decide they want to join the migration. Miss Lily, a waitress at the local diner takes interest in the street thug, and later joins the journey. All hell breaks out among one of the teams before they depart the base, leaving them no choice but to separate for the next part of the journey.

All the survivors experience trying times within their own teams and with outsiders. Conflicts develop, disloyalties emerge, unexpected romances develop, all while chaos and death patiently wait to strike at any given moment as they trudge toward the better lands.

Susan Clawson I live in Massachusetts, in a rural town about 40 minutes north of Boston! I moved here about 14 years ago, from the Vermont area, where I grew up since I was 4-years-old. I married my freshman year high school sweetheart, 28 years after we graduated! Two years later we moved here to MA!! Between us, we have 5 adult children and 3 grandkids who are spread out across the USA! When we retire, we plan to do so near a lake in Kentucky!

I’ve always enjoyed writing and am excited to bring to you the 5-book suspense ‘better lands‘ series!

NOTE:  Book two will be available in October 2021.
Follow Susan Clawson for notifications and updates.