Pin It
You are here: Home / Book Reviews / Call of the Wind 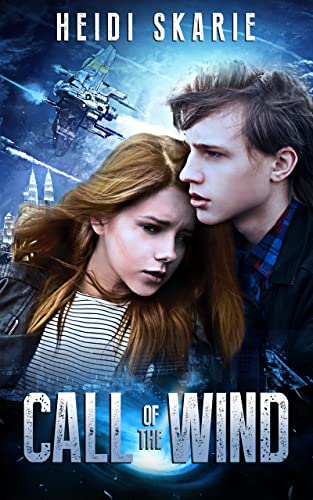 Call of the Wind:
A Sci-fi Space Opera with a Touch of Fantasy
(Star Rider Book 4)

Will a young pilot shot down in occupied territory be executed or overcome impossible odds and survive?

Living under the shadow of an interplanetary war, Baymond Kimes’ life is shattered when his father is shot at a spiritual gathering. He turns to his childhood friend, Princess Fawniteen, for comfort. Their innocent love blossoms, but when Fawn’s parents reveal she was betrothed at birth to another, the young couple is devastated. Fawn dutifully accepts her fate, and Baymond escapes at sixteen by joining the Interplanetary air fleet.

Trained as a fighter pilot against the forces of a powerful sorcerer-deity, Baymond grows up fast. Eventually, his aircraft is shot down and he’s captured.

Can Baymond escape to see Fawniteen again and use his special gifts to save the galaxy?

If you like brave heroes, true love, exciting adventures and space battles you’ll love Call of the Wind, about the next generation in Skarie’s exciting sci-fi series

ReadCall of the Wind to join the fight for freedom today!

Review of Call of the Wind

“Call of the Wind beautifully oscillates between adventure, romance, and mystique. I was enthralled by the exciting plot that blends in spiritual thoughts. Skarie is a master in weaving her wisdom into stories that remain in your heart even after you have turned the last page.”

“Call of The Wind, the latest in Skarie’s Star Rider series, is more than a powerful tale of the cosmic battle between good and evil. It’s also a compelling vision of the enlightened transcending the confines of time and space, even death.”

–Barbara Deese, author of the No Ordinary Women series

Heidi Skarie’s life as a writer began when she had a dramatic dream about a futuristic world at war. The vivid dream was like watching an action/adventure movie. Excited about the dream, she recorded it upon awakening. That night the dream continued where it left off. After six nights, Heidi had a hundred-page journal recording the series of dreams. This awakened her interest in writing, which continues to be one of her greatest passions today.

STAR RIDER ON THE RAZOR’S EDGE is that book Skarie wrote as a result of this dream. It is a science fiction novel about team of undercover agents working with the local rebels to overthrow the military government.

ANNOURE AND THE DRAGON SHIPS is a story about a young noblewoman kidnapped off the coast of Saxon England by the vikings in 794 A. D.

RED WILLOW’S QUEST tells the story of a young Shoshoni maiden who undertakes a dangerous quest to become a medicine woman. This book’s extensive research effectively brings to life the Native American people of the 1800s.

Colorado Libraries said: “The Story is well written and rings true. Ms. Skarie has a wonderful voice for the character and obviously has extensive knowledge about the life and customs of the Shoshoni tribe.”

Endorsement of ANNOURE AND THE DRAGON SHIPS:

A brilliantly-paced historical saga accurately researched, that takes the reader from the one of the first Viking raids on Saxon England to the steppes of Asia. Along the way there is violence, adventure, vengeance, redemption and love. Anyone who enjoys The Vikings television drama will love Dragon Ships.

Heidi Skarie enjoys hearing from her readers. Her email address is heidi.skarie@gmail.com.