Pin It
You are here: Home / Book Reviews / Cascade

Cascade was a super fun read from start to finish! Between the fantasy references and the underlying mystery, I found myself unable to put it down! I always had to read one more chapter just to see what would happen next and the ending was only partially what I expected it to be! I don’t want to spoil anything, but I think Zane found the right balance of teasing the ending while still yanking the floor from beneath me. I truly can’t wait to see what he writes next!  -Amazon Review 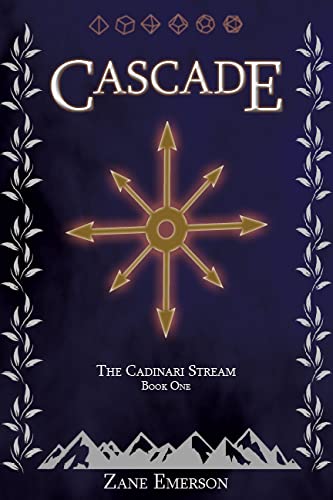 Jordon is a Dungeon Master, and he liked to think he was a decent one after a whole year of writing and running his own home-brewed campaign. He just didn’t think he was so good at it that he could actually write a Fallen God into existence that was hellbent on destroying the multiverse. So, when a character from that very campaign shows up on his doorstep, begging for his help in saving her world, it was only responsible for Jordon to step up and save it, right?

With his Outcasts behind him, Jordon descends through the Cadinari Stream and into a world of his own creation, finding that the life of an Adventurer is much more than improv and dice rolls. And Taldora, that world he had only seen in his dreams, was full of more wonders and mystery than even he had imagined.

Zane Emerson is a giant nerd. It had to be said and he’s the one saying it… in third person… in his author bio. Well anyway, Zane is an avid reader of Fantasy, Sci-Fi, and Comic Books. If given the opportunity, he will give you a thirty minute lecture on why Wally West is the greatest Flash of all time and not Barry Allen who’s biggest claim to fame is that he’s the one who created the Speed Force. Like, Wally literally ran across the universe faster than instant teleportation and-… Okay not the point. Anyway, Zane would love to stop typing in the third person now so go follow him on twitter @ZEmersonWrites and talk to him there.