This book is so inspirational and it’s an easy read. Gary gives an practical insight on what a life of CHAMPION is really like both on the field & in business. This book will inspire you on how having a solid game plan will help overcome adversity. BUY IT NOW!!! – Amazon Review 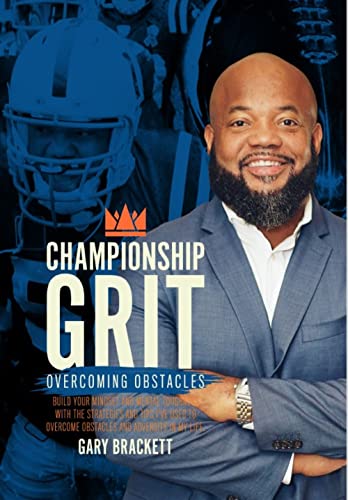 Championship Grit: Overcoming Obstacles:
Build your mindset and mental toughness with the strategies and
tips I’ve used to overcome obstacles and adversity in my life.

From college to the NFL, Gary Brackett has always been a walk-on. But it’s not how you start, it’s how you finish.

In college, Gary finished at Rutgers as the team’s defensive MVP, and in the NFL Gary became a Team Captain and a Superbowl Champion. Now, he wants to share the strategies and tips he has used to overcome obstacles and adversity in his life with you!

“Championship Grit” is book based on the premise that, in life, we all face obstacles. Although our specific challenges may differ, there isn’t a single one of us that is without problems. And in order to overcome them, we all need one thing——grit!

Author, Gary Brackett is no stranger to overcoming adversity—not only in football/career, but in life. In football, Brackett went from college walk on, to free agent in the NFL…and ultimately to captain of the 2007 Indianapolis Colts Championship team. From losing both parents and his oldest brother just months apart at a young age, to losing his restaurant franchises amid the global pandemic, to going through a divorce after 10 years of marriage, Brackett credits his unmatched grit for his ability to thrive in life, even through the most difficult circumstances.

“Championship Grit” is Gary Brackett’s personal playbook to help you understand how to develop and use grit in order to overcome any obstacle—both in life and in business.

It is Brackett’s ultimate hope that “Championship Grit” will provide inspiration for anyone struggling with a challenge.

Gary Brackett is also a business coach and a keynote speaker and can be reached at info@garybrackett.com; and for more information, you can visit the website at garybrackett.com

Check out the awesome specials Gary has for you:
Order Gary Brackett’s Championship Grit: Overcoming Obstacles

Continued to be impressed and motivated by Gary Brackett! What a true champion on and off the field! This man literally only sees opportunities – no obstacles!  -Amazon Review

Gary Lawrence Brackett (born May 23, 1980 in Glassboro, New Jersey) is an American football linebacker for the Indianapolis Colts of the National Football League. He was signed by the Colts as an un-drafted free agent in 2003. He played college football at Rutgers. Brackett attended Glassboro High School. He was a two-time All-South Jersey selection, a two-time All-Group I choice, and a two-time All-Tri-County Conference choice.

Brackett was a walk-on to the Rutgers University football team. By his senior year, he was captain of the defensive team and won the team’s defensive MVP honors.

Gary Brackett—A.K.A. “Your Championship Coach”— is an American business coach and the founder of Champions’ Academy.

Former Super Bowl Champion, Gary Brackett, pursues his professional ventures with the same passion and voracity as he did his 9 year career in the NFL. His unshakable confidence, unmatched work ethic, and unwavering commitment to constant growth and learning has served him well in his seamless transition from football to business. An accomplished entrepreneur in his post-football life, Gary is a two-time author (WINNING (2011) and GRIT (2021), podcast host, corporate trainer, and success coach; but his greatest passion (outside of being a pro dad to his three beautiful children) is helping people thrive – not only in business, but in life.

Gary brings the same energy to his speaking engagements and coaching clients that he did to the field—inspiring, motivating, and empowering audiences and clients alike to find the best within themselves, apply championship strategies to leverage success, and to realize their goals and enjoy a life of fulfillment and happiness in all areas of their lives.

Check out the awesome specials Gary has for you:
Order Gary Brackett’s Championship Grit: Overcoming Obstacles