Pin It
You are here: Home / Book Reviews / Fiction / Adventure / City of Schemes

A futuristic mixture of mystery, humor and suspense blended with disorder, foul play and reckless abandon to create a story of love and friendship. … – Amazon Review 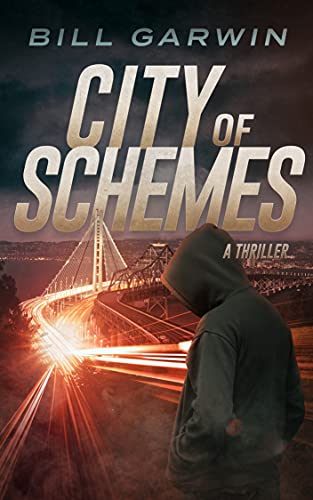 Why is everyone hunting Megan Garrity?

Charles Hill watched the smugglers’ Zodiac carrying Megan and Nick Garrity speed through San Francisco Bay’s frigid waters. Megan was breaking into the government experiment that is Norcal, a place of massive social and scientific advancements. A place where her autistic son could thrive.

Charles, charged with bringing Megan and Nick to safety, hadn’t envisioned a high degree of difficulty on a simple recovery mission. If his reclusive employer had shared Megan’s secret with Charles, he might have been able to prevent them from being hijacked by a vendetta driven blackhat hacker armed with a perpetually angry psychopath. Worse, Charles had no idea the hacker and hitman were under the direction of the unofficial, completely corrupt, King of Norcal.

“Bill Garwin is a skilled storyteller with a unique gift for plot.”   Readers’ Favorite

Bill Garwin I received a B.A. from UCLA, an M.S. in Journalism from Boston University, and a J.D. from the University of San Diego. I studied martial arts for 20 years, hold a 3rd dan karate black belt, and have practiced and taught fencing.