Pin It
You are here: Home / Book Reviews / Confessions of the Magpie Wizard: Book 1: Infiltration

A Entertaining Romp. Takes the quite familiar premise of a magic school and slice-of-life and turns it on its head with a cynical and unreliable narrator giving it that very fun twist. Also doesn’t commit the mistake of confusing the reader with a convoluted magic-based story very simple and sweet. – Amazon Review 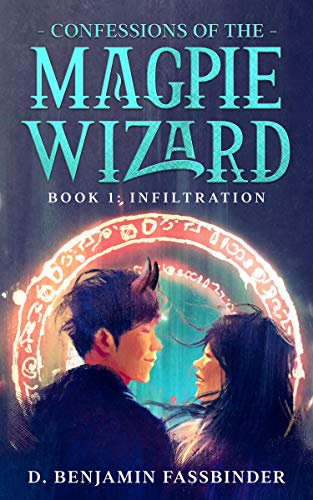 How does such a fine, upstanding devil become one of humanity’s greatest heroes?

Captain Malthus of the Grim Horde had everything going for him. A well-connected father. Top tier magical talent. Military glory. He should have coasted to a life of luxury among the cream of devil society.

And then he threw it all away by romancing the wrong devil’s daughter. With his literal neck on the line, he was exiled on a spy mission deep in the heart of human territory. They meant it to be a death sentence, but it didn’t need to be. All the half-human had to do was keep his head down and not draw attention to himself until things blew over.

Shame he wasn’t the type of devil to learn from his mistakes. This time, it wasn’t a woman who was his downfall.
It was several.

Such a shame, indeed. He was such a promising young devil.

Content Warning: This story contains light sexual themes and other content that some readers may find objectionable. If it were a movie, it would be rated at a light R or a heavy PG-13.

D Benjamin Fassbinder I’m is an office drone from the Pacific Northwest who loves writing and storytelling. I have a lifelong love of anime, manga, video games, science fiction and fantasy, and I love blending genres in my works.