Pin It
You are here: Home / Book Reviews / Fiction / Adventure / Cosmic Traveler With A Smashed Compass

FREE on Kindle until February 20th.

A riot of profound thinking, humour and storytelling that addresses the biggest question of them all – what happens when we die? If this book is any indication, there’s a lot to look forward to, so long as you learn how to play the eternal game, which, on the basis of this book, is actually playing you.   – Dr Stephen Bird – Cambridge PHD – Linguistics 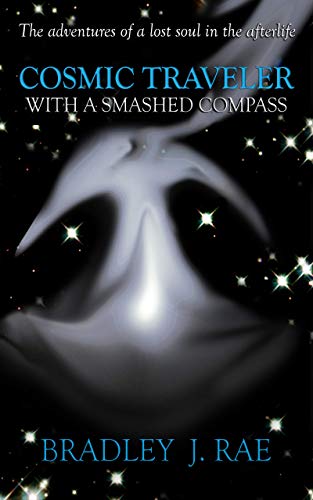 Cosmic Traveler With A Smashed Compass:
The adventures of a lost soul in the afterlife

The churches and mosques are in flames. The Buddha is reborn depressed. And Jesus Christ has returned with a daunting message that starts with; “Read my lips…” In a universe gone mad, where’s the cosmos most revered son to go, when no God is worthy of providing him a home?

Cosmic Traveler With A Smashed Compass is a metaphysical adventure story that playfully explores Tibetan Buddhism, the psychological realm of the gods, and what happens to the mind at the moment of death. An unforgettable satire that resonates deeply, this story chronicles a soul’s journey across the cosmos, from Heaven to Earth til death does it again depart, returning to the gods who await the soul’s coming with a vengeful spite that is both wondrous and terrifying. As is the nature of satire, first comes the laughter, then comes the profound reflections about life and the hereafter.

All world religions adhere to the notion of heavens and hells manifesting in the afterlife. Where they differ is in understanding the true nature of these realms.

In Tibetan Buddhism it is believed that at the moment of death a person’s mind (soul), transcends into a dream state known as the Chonyid Bardo (the afterlife). It is in the afterlife that gods manifest as illusionary representations of one’s religious beliefs, manifesting in a psychic production that portrays the inescapable plight of all sentient beings; Self Judgment, as to who we were in life, compared to who we could and should have been. Although of dream, the heavens and hells of these gods are as real to the soul as Earth is to the human body.

Cosmic Traveler With A Smashed Compass dives head first into this theological concept with a witticism no god will ever tolerate and no soul should ever dare. In the event of controversy, no one will be home to take your call.

* By reading your book I am less scared of death…see it more as the beginning of an exciting journey vs ‘The End’. It also makes me seriously take a look of how I am living Every Moment NOW. Elle – MI

* I think you have written the modern day Tibetan book of the Dead. The end of the first part with Jesus and Baconian was fantastic. The whole way Baconian got into Jesus’ head was art. Chris CA

* On to Part 3 and still enjoying the adventure. One thing I will say is, I never know where the story’s going! There’s always a little surprise here and there down the road with the underlying story intact. I also enjoy the reflections I have after reading a part of the book and then thinking about it. Will keep you posted but I have to say this has been one of my more enjoyable reads so far this year. Jagger. Buddhist Practitioner – NY

Australian born, BjR, studied Law before seeing the light and shifting his interests to World Religions, Philosophy, Metaphysics and Psychology. Inspired by the works of Marcus Aurelius, Buddha and Saint Augustine, he decided to devote his life to helping people in need. Hence, has traveled the world documenting, and advising on, humanitarian crises and social initiatives for Governments and NGOs. Presently, he lives in Hanoi, Vietnam, with his pet goldfish, Humperdinck, where he is now writing movie scripts and books on eastern philosophy, humanitarian and environmental issues, and the secret to life, being laughter. His latest project is dedicated to spreading the teachings of His Holiness the Dalai Lama.

BjR’s overall mission is to live a good and meaningful life, without limitation. To learn more about the author, go to www.SmashedCompass.com