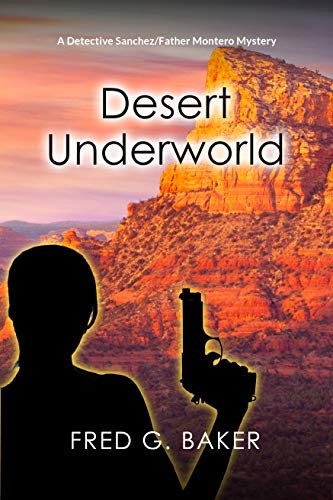 Phoenix Assistant DA Clara Alvera calls Detective Lori Sanchez in the middle of the night to report the gruesome murder of her friend—a reporter named Josie Vale. The reporter was onto a story about counterfeit prescription drugs and the powerful Maraxx Pharma Corporation. Sanchez vows to protect the only witness named Lolita, a young gymnast.

As Sanchez builds her case, she learns that members of a local gang are perpetrating murder and trafficking fake pharmaceuticals. The Sinaloa Cartel—Sanchez’s old nemesis—is deeply involved. But how? And why do dead bodies keep turning up to block her investigation?

Sanchez works with her old friend, Father Guillermo Montero, to unravel a complex criminal enterprise that is hidden under the desert. When the cartel kidnaps Lolita, Sanchez must solve the mystery and save her life.

She must enter the desert underworld.

Fred G. Baker is a hydrologist and award winning author living in Colorado. He writes pirate stories, science fiction novels, and mysteries. Look for his story collections and novels on Amazon and Kindle, and at the author’s website othervoicespress.com. Recent works include The Modern Pirate Series of short stories about Alex the Pirate; the mystery novels, An Imperfect Crime and Desert Sanctuary; the Sci Fi adventure thriller ZONA: The Forbidden Land; the espionage thriller The Black Freighter, and other titles. He also writes nonfiction and genealogy books and articles, scientific articles, reports, and book chapters