Pin It
You are here: Home / Book Reviews / Divorcing Oedipus

This book, Divorcing Oedipus, is a must read about a serious set of circumstances and the very intriguing cast of characters that navigates one tragedy after another. M. Ophelia explores the very dark and often dreary subject of drug abuse and the unrelenting affect it has on family. Her characters are colorful, and her use of side-splitting humor makes Divorcing Oedipus a fast read because its hard to put down; it’s a page-turner.  -Amazon Review 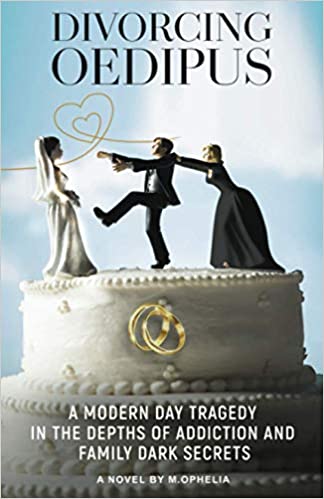 Divorcing Oedipus:
A Modern Day Tragedy in the Depths of
Addiction and Family Dark Secrets

Faith Nathaniel, a mom in her early thirties, is living the picture-perfect life. Trey, her husband, is tall, dark, handsome, and in-line to take over his family’s multimillion-dollar business, a privately-owned drug and alcohol rehabilitation center, St. Mary’s.

Faith matches all the expected images-she volunteers at her children’s private school works with charities, and co-hosts Gala’s across Fairbanks. Initially, she is unfailingly supportive of her husband and of her family’s success. She is happy to write Trey’s papers for his master’s degree. She loves taking care of his very ill stepfather during the day. She delights in telling his mother how beautiful she is every waking minute.

One night in October, Faith’s perfect picture is shattered forever. She intercepts a suspicious text message on Trey’s phone. She confronts him. He refuses to reveal his mistress’s identity. Faith is anguished and kicks him out. Trey moves in with his mother. The following day, Trey and his mother began to viciously attack a heartbroken, unsuspecting, naïve Faith. Faith is left bewildered and with a lot of unanswered questions. As time passes, Faith keeps hoping things will get better, but as family secrets are uncovered, her situation progressively worsens.

Eventually, Trey turns to opioids, loses his job, and as a last attempt to save his marriage, he confesses his mother’s plot to remove Faith from the family, using Helga, a middle-aged, married employee and mother of five as the temptress. Faith, in despair, tries to find herself; she turns to prayer, God, and a lover named Brad.

Divorcing Oedipus is a whirlwind page-turner about the lives of an American family, struggling with mental illness, power, and greed. M. Ophelia’s hilarious narrative, about the pitfalls of a wife trying to live her life to please others and getting gobsmacked for her efforts, is a riveting, realistic story of a powerless wife and mother navigating an elitist Alaskan family, who employ their excessive resources to destroy her. Will she recoil in retreat? Or will she make lemonade out of lemons?

If you or anyone you know struggles with self-harm or substance abuse, please seek help by calling the SAMHSA 1-800-662-HELP (4357).

M. Ophelia currently lives in the Pacific Northwest with her children and her dog, Miss McButter. Ophelia is originally from the Southeast. She has enjoyed a life of adventure, having lived in numerous places in the United States, including Alaska. She graduated with a degree in Political Science, from Western Washington University. However, her passion has always been writing. Ophelia has written two unpublished novels in addition to D.O. She enjoys exploring nature and is an advocate for many charitable causes. She has volunteered and served on the committees of many non-profits. Currently, she is focused on serving others as a healing arts practitioner through the Tree of Life Sanctuary. She is a Universal of Life Church Minister.