Pin It
You are here: Home / Book Reviews / Four Seasons of Love: Anthology of Poetry 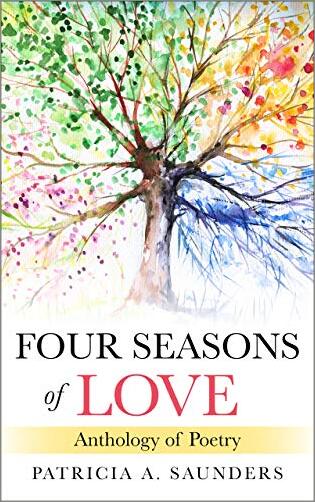 Four Seasons of Love is an anthology of poetry that separates the emotions of love into four chapters that covers the seasons. Both men and women can relate to their first kiss, being smitten, wondering if its real and the heartbreak of loss. The author writes each poem to have the reader visualize, feel, and remember those feelings.

Four Seasons of Love, something that most have experienced or know. Going through each Spring, Summer, Fall, and Winter in the cycles of love and loss.

Poetry is the window to the soul that exposes everything. The emotions that are stirred up within make you laugh, cry, and remember a piece of you on the pages.

Spring is the blossoming of love.
Summer is when it is passionate.
Fall, as the season changes, so do you.
Winter can be so cold, but yet a beginning of a new chapter.

Self Published Author, Patricia A. Saunders was born and raised in Connecticut before relocating to the San Francisco Bay Area nearly 26 years ago. She received her Master’s in Management from the University of Phoenix in 2011. After the passing of her mother who had Alzheimer’s, Patricia decided if she inherited the disease she wanted her words to be her legacy and that all the words that she kept to herself were to be released.

Her work has been featured on a Coast to Coast Book Tour at the Los Angeles Times Festival of Books, Toronto Word On The Street, Sacramento Black Book Fair, Tucson Book Festival, Miami International Festival of Books and AARP Life@50+ Spring Convention. Recently she was chosen among 100 authors from around the United States to participate in the Author’s Pavilion at the 2018 Congressional Black Caucus Convention in Washington, DC.

She is a monthly blogger of her own blog Blessed & Curvy who covers today’s hot topics. Also she is certified speaker with the Professional Woman Network for Women’s Issues & Diversity.

She released her first self published book Through the Fire (March 2012) which covered emotions from situations, circumstances, and life lessons that have influenced her over her lifetime. On a mission to complete a book a year in case she inherits the ugly disease she released her second book Loving Me (2013) and third Let It Rain (2014) which is also self published and covers various topics from love, grief, self image, self esteem, bullying, and discovery of self love .

Her fourth book (2016) This Too Shall Pass was released by AuthorHouse Publishing and readers have given it a five star rating. The book was inspired from three note cards she received after the passing of her mother when she felt like giving up on life, on the brink of losing her home and being unemployed that encouraged her to live for those who loved her.

Her fifth book was released by Book Baby Publishing (2017) There Is Sunshine After The Rain a non-fiction novel that includes poetry is birthed after the tenth anniversary of her Mother’s passing, the reality that with every lesson that she has experienced through life that there is a reason, there are tests that all are faced with, but it’s how you respond. Saunders chose poetry and nonfiction to let the readers know the thought process behind the poetry, tools to help others who may face the same circumstances, and it builds a relationship further between the author and those reading her words.

Patricia is a Supervisor in Silicon Valley, in her spare time she enjoys to travel, wine tasting, and spending time cooking for friends and family.