Pin It
You are here: Home / Book Reviews / Grimes’ Punishment

This is the first book I’ve read in a long time and it definitely did not disappoint! The main character Roger Grimes is a surprisingly likable character, he is tough yet has a heart. Though he has a shady background, it makes him an even better private investigator- and more relatable human. I found myself unable to put this book down. I absolutely cannot wait for more Grimes books! While reading this, I couldn’t help but see this as a television series, Netflix, perhaps- it would definitely be an awesome watch. -Amazon Review| 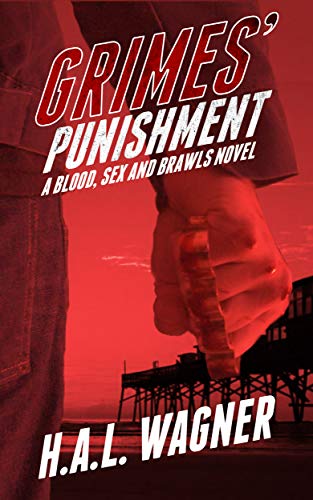 “The action is gut wrenching in it’s realism, the characters described so well they get you either mad or give you a hard-on.” –Sons of Spade http://sonsofspade.blogspot.com/

Roger Grimes was a thief. At thirty, he knew it couldn’t last so he became a private investigator hoping to right past wrongs. His first case went smoothly. Big shot Attorney Willis Sanford hands him his second case, find a runaway teen girl in Daytona Beach, FL. What he finds is the stuff of nightmares. The sunny coastal town casts dark shadows and in them Grimes discovers a sex trafficking ring.

Grimes must make a choice, turn it over to the cops or do what he knows he is good at and unleash a violent storm on those who would hurt the most innocent among us.

A gripping example of vigilante justice that won’t be forgotten. In the vein of anti-heroes like Mikey Spillane’s Mike Hammer and Paul Kersey of Death Wish, comes a new PI Roger Grimes in his first novel. The first in this new series. Read how it all begins.

Yes my real name is H.A.L. Wagner It is a family name and I’m not the first. If you are reading this than you probably have skimmed my books and know the genres I write in vary. I enjoy crime/mystery and love the possibilities science fiction offers.

My latest vigilante justice series starts with Grimes’ Punishment and now Grimes’ Retribution. Set in Daytona Beach, FL, it tells a neopulp story of Roger Grimes, former thief turned private investigator. He’s on the hunt for a run away teen and quickly uncovers a sex trafficking ring. Instead of just calling it in to the police, he takes matters in his own hands.