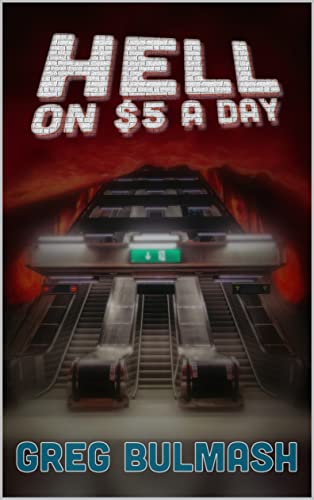 Kurt Gray’s an ordinary work-a-day schlub, junior copywriter, completely unremarkable in every way except he was kidnapped to be a human sacrifice, accidentally fell through a portal into Hell, and is traveling through the afterlife with a vampire.

Alain was made a vampire in WWII as part of a military experiment. He’s physically entered Hell to journey through all the planes of the afterlife, reach Heaven, and plead his case before God… to be reunited with the woman he loves. Only one problem: he’s got two mortals he didn’t expect along for the journey and Hell knows they’re coming.

Greg Bulmash started as a humor blogger before the word “blog” was coined. From that came an urban legend (Google him) and a job as the Senior Editor at IMDb.com. He’s gone on to work as a technical writer for AWS and Microsoft, a developer educator for Amazon Alexa, and founder of the Seattle chapter of CoderDojo, where he organized over 150 free STEAM education events for Seattle area kids.

He has spoken or emceed at technical conferences on 3 continents, has professionally hosted karaoke at bars in Los Angeles and Seattle, and was a winning bachelor on The All New Dating Game, where his prize was a trip to Florida with a student nurse.

He currently lives in the Pacific Northwest with his wife, teen sons, and a dog named Tulip.