“This book was so good! “Highland Conquest” is the second book in this rich historical romance series by Alyson McLayne. The author did a fabulous job of grabbing my attention and keeping me captivated until the end…” – Night Owl Reviews, Top Pick 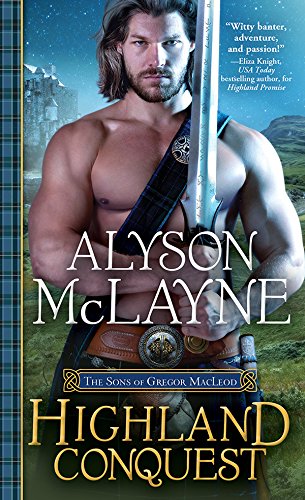 HE WAS LOOKING FOR VENGEANCE
Laird Lachlan MacKay never planned on leading his clan, but when his older brother was murdered, he was left with no choice. His vow to avenge his brother has led him to the MacPherson clan—and their bewitching healer, Amber.

INSTEAD HE FOUND HER
Amber MacPherson is desperate. Dressed as a boy to escape her clan’s treacherous leader, she runs right into Lachlan—who orders her detained. At first she causes him nothing but frustration, especially when she blackmails him into helping her clan. But when she’s threatened by the same man who murdered his brother, Lachlan will do whatever it takes to keep her safe—and by his side.