Pin It
You are here: Home / Book Reviews / Highlanders Without Kilts

Just 99 cents for a limited time only!

A well written history of a family that unfortunately suffered in WW I through sacrifice and service. Thank you Dee for writing this wonderfully told story. I was hooked right away through your introduction of the family and the “boys”. The book does a great job bringing the reader into the theatre of trench warfare and the battle weary troops of The Great War and their families at home. It also tells of the tragic maritime disaster of Halifax and links that to the main characters. I was unfamiliar with the battle of Vimy Ridge, but Highlanders has enlightened me. As others have said, this story will stay with me. – Amazon Review 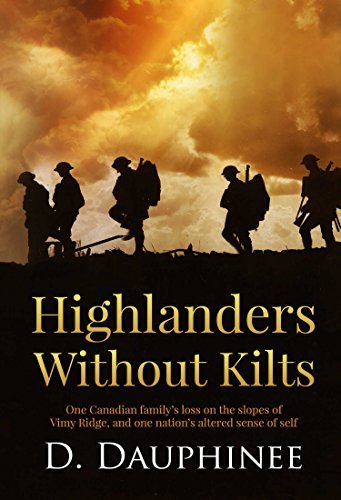 Highlanders Without Kilts is a story of love, war, uncommon disaster, and triumph.In 1917, the world was embroiled in a terrible war, the likes of which had never been seen nor imagined.

Canada, still a dominion of Great Britain, was early in the fight and sent seven-and-a half percent of its population to fight for King and Country, ultimately contributing a force of more than 600,000 soldiers, nurses and chaplains.In April of that year, the entire Canadian Expeditionary Force, fighting together for the first time, battled their way to the top of Vimy Ridge in northern France. In December, the city of Halifax was rocked by a devastating accidental explosion that caused 9000 casualties.

Highlanders Without Kilts is the story of one Nova Scotia battalion’s odyssey, and one family’s dreadful loss. From the unspeakable death and destruction came a nation’s altered sense of self and a newborn path to its future.

Dee Dauphinee is an American author of novels, biographies, and essays. His writing has gained a following with readers interested in the out-of-doors, history, travel, human interest, fly fishing, and the construction of essays.

Born with wanderlust in Bangor, Maine, once old enough, he hit the road west with a guitar, one duffle bag, a light nylon parka and (according to the journal from that year) eighty-seven dollars. A photographer, a farmer, a fishing & mountaineering guide, a semi-pro wide receiver, and trained as a surgical first-assistant, for more than twenty years, he was “in the right places at the right times.” He found whatever devices he could to travel the world. Photography and mountaineering were the keys.

Living in Jackson, Wyoming in the 1980s was Heaven, he recalls…he was climbing or fly fishing every second he could. Eventually, he learned that being only an average photographer, if he was willing to crawl on his belly for a mile in the mud, or not be adverse to being in harm’s way to get an image, photography might take him places. It did; to places like El Salvador, Peru, the Arctic, Honduras, Europe, Nicaragua, Venezuela, Iraq, Israel, Egypt, Ecuador, Jordan, the UK, Panama, and many places in between.

No matter what he was doing, or where he was going, he was always in the company of a book, a journal, and a fly rod. When he wasn’t taking pictures or interviewing people, he rigged-up his old Sage fly rod and fished every watery ditch that might hold fish. Now he writes about those experiences.

Dee has had four books published; “Stoneflies & Turtleheads,” a collection of fly fishing essays from Maine and around the world, “The River Home,” a novel, and “Highlanders Without Kilts,” a “poignant telling of a storied Canadian battalion’s odyssey during the Great War.” –Alan Cameron, Founding CEO & Producer, Veterans Voices of Canada. “When You Find My Body: The Disappearance of Geraldine Largay on the Appalachian trail,” was released by Rowman & Littlefield on June 1st, 2019.

He is currently working on another novel, and a beginner’s guide to fly casting.

Dee lives in Bradley, Maine, with his wife and two children, who all hike and fish.