Pin It
You are here: Home / Book Reviews / Homeless Bones

A fabulous read. Lots of action and suspense. What a job creating the characters. Steven Lewis is a great writer when it comes to twisting thrillers. His ex-SAS good guy, Sean Doyle, versus bad, though you don’t always know who the bad ones are. Amazing, I recommend this book to anyone that reads thrillers and action suspense. Sean Doyle is such a great well developed character. As the story grows you see a strange and eclectic team emerge. – Amazon Review 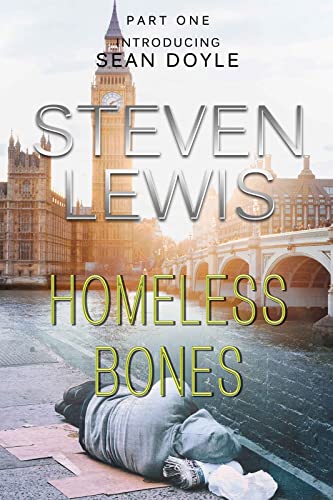 Returning home after being forced on leave from the SAS regiment, Sean Doyle is head-hunted by a clandestine department operating out of Whitehall. The former soldier becomes embroiled with a shady government minister, while also tracking the killer of his own grandmother.

Lady De Pen Court, one of the richest females in the world, also takes an interest in the ex-Special Air Service operative. An interest that goes past his recruitment on a family matter and some would say crossing boundaries.

From a funeral parlour to cardboard city and the up-and-coming dockland of London, Sean’s tenacity never diminishes.

This is truly a great suspenseful read. Lewis packs this story with lots of action and surprises that will leave you at the edge of your seat. He has done a fabulous job building his characters and the suspense in the plot. I enjoyed the element of military time increments. It made me feel like I was in the character’s head throughout the book. Grab your copy today! You will not be disappointed. -Amazon Review