Pin It
You are here: Home / Book Reviews / Humpty Dumpty was Pushed: A Novel

“Marc Blatte writes like a freight train on fire. Humpty Dumpty Was Pushed is a page-turner that serves up plot as elegantly twisted and satisfying as the best urban crime novels…as crackling and colorful as the city of New York itself.”
–Fred Berner, Executive Producer, The FBI and Law & Order

“A dark, witty, and often brilliant novel. Humpty Dumpty Was Pushed is such shocking good fun, you won’t feel guilty about laughing at all the carnage.”
–Mystery Scene 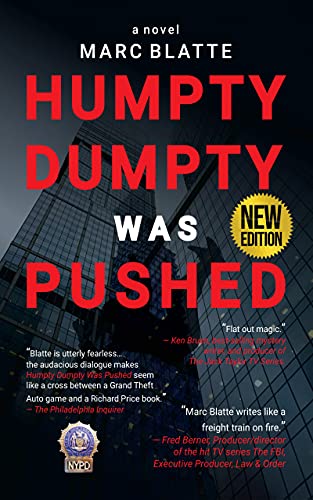 Humpty Dumpty was Pushed: A Novel

In this novel, the unspoken truth is it’s a dog-eat-dog world. There are no accidents, and there’s a reason for everything that happens. Humpty Dumpty was pushed.

The victim is a mesomorphic doorman. He lays stretched out on the parking lot pavement just a few yards from the nightclub where he worked.

On the case is a brilliant, troubled eccentric, media-darling-cop Sal Messina, aka Black Sallie Blue Eyes—“so smooth he can take your socks off without touching your shoes.”

Sal’s investigation leads from the wealthy lairs of Manhattan to the manicured estates in the Hamptons to the PJs in Queens and places beyond. Like the immigrant communities of the Boogie Down Bronx inhabited by fierce survivors of ethnic wars.

It’s a wild ride through a vast craven underbelly of society that takes its toll on both the detective’s personal and professional life. Before this case, the detective thought he had seen it all. But this time, what’s coming is way beyond the officer’s range of vision.

Marc Blatte is an illustrious songwriter and music producer who has written songs for many well-known singers and his work has generated both domestic and international hits. Words have always played a part in his career, along with music. His time spent creating music and lyrics for household names including Pepsi, Coca-Cola, Pizza Hut, Goldfish, Marc composed the ubiquitous song for Goldfish, “I love the fishes ’cause they’re so delicious” and for Goodyear, which he created under the creative direction of the best-selling author James Patterson-only deepened his understanding of how to engage people with his words.

Though Humpty Dumpty is Marc’s first novel, it has been optioned for film and TV five times, though it has yet to make it to the screen. He lives in Summerville, South Carolina with his wife and continues to write and produce music. A recent song he wrote with the Brooklyn-based trio The Slim Kings was featured in Nurse Jackie and Bloodlines and he’s currently making music with the Roots/Americana band, The Distant Thunder. He’s driven to create and hopes to inspire others with his words and music.