Pin It
You are here: Home / Book Reviews / Fiction / Adventure / Infinit. The last bridge of Sam

The book is interesting in many ways. It got creatures and humans with different powers. There is a time capsule with the help of which Sam travelled to different infinits. The paintings are real worlds and one can go into different worlds through it. Also, there is a unique character called ‘Fear’ who is responsible for making you fight/die with your fear as he will make your fear reality. And it is interesting to see how fear reacted to Sam.The story touches upon various themes like home, family, belonging, finding oneself, and self-love– all of which will touch the readers in some way.  -Amazon Review 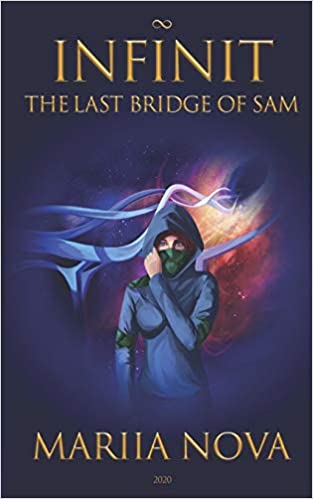 Infinit. The last bridge of Sam.

In the year 2070, when there is no longer a planet Earth. Sam, the lead character, an orphan mutated girl embarks on a voyage through the 7 Infinits in order to save the woman who raised her.

On this incredible journey she meets a heartless guy named Fear, with whom she falls in love. Sacrificing all, they travel from one Infinit to another, meeting the 7 leaders. They must unite to fight the dark forces and return the Earth back to the humans. An allegory, the book informs its readers regarding cause and effect as it relates to our emotional behavior in a fun engaging, and imaginative way encapsulated in a SciFi Fairytale.

Nova believes she has found a mechanism to remind people about the simpler things we all tend to forget in our lives placing the importance on such values as nature, family, freedom, truth, justice, honesty, friendship and love.

Mariia Nova was born on May 12th 1984 in the small village of Smolensk a region of Russia where she grew up. At the age of fourteen, she moved to Smolensk City where in 2006 she graduated from the Teachers’ Training University having studied both English and German languages. In 2004, she journeyed to Barnstaple, London and studied acting. She moved to Los Angeles, California in 2014 where she now lives. Young Mariia grew up surrounded by books. In her village, there were almost no children – so books replaced friends as well as places to explore. She spent most of her time in nature.

While cattle grazed nearby, the little girl used her imagination to entertain herself – she envisioned that all of nature surrounding her was alive. The trees and flowers became her friends and were the best listeners. She often took the books with her as she communed with nature, reading to the trees, grass and flowers. Later at the age of twelve, she started to write her own stories about her friendship and adventures with nature describing every flower, tree and animal as if each were an individual person that she knew well. Later, at University, she was captured by “The Picture of Dorian Gray” by Oscar Wilde. Since then she began to study psychology enrolling in additional classes there. This new discipline showed her a whole exciting world within the human brain. Already at that time she could see the similarity of two worlds: one within her human body and the other outside. All of this inner knowledge contributed to her quickly learning the art of storytelling.

She began to professionally write scripts for music videos and also for films. “The last Bridge of Sam.” is a work of five years of exploration not only regarding the connections of neurons in the human brain but also the mysteries of DNA and the information that is encoded within its ribbons. Maria transformed during this process and hopes that the reader will also find a personal journey as she goes with Sam through the bridges of the INFINIT Universe. The book informs its readers by examining the cause and effect of some of our emotional behavior in a fun and engaging way presented in the form of a SciFi Fairytale.

The author believes she has found a way to remind people about the simpler things that we all tend to forget when we are chasing our goals and are distracted by our busy lives. Maria Nova insists that on this journey, we bring our attention back to the core tenants of nature, family, freedom, truth, justice, honesty, friendship and love.