Pin It
You are here: Home / Book Reviews / Jessica’s Dreamcatcher 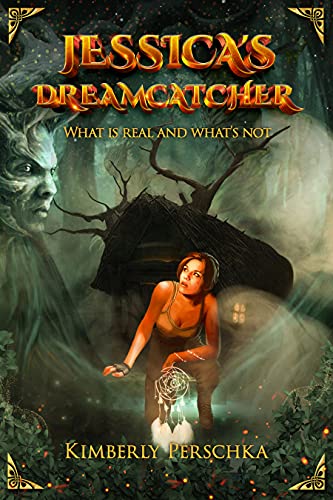 Jessica’s Dreamcatcher:
What is real and what’s not?

You can also get the book on Barnes & Noble

Every so often a dream catcher must be emptied of the nightmares it has caught. Who does it and what do they see?

The dream catcher legend is an old one. It is hung in lodges and teepees to assure peaceful dreams. The good dreams knowing the way, slip through the webbing, and slide down the soft feathers to the sleeper. The bad dreams not knowing the way become entangled in the web to be emptied later.

My grandmother’s dream catcher had given me, she bought at a yard sale near her home in Utah, must have been full or never emptied, because shortly after I received it, the nightmares began to flow. In one of her dreams, she finds herself in a forest with talking trees. She meets a young man having emotional stress from the death of his brother. In another dream, she discovers a young boy in a dungeon.

She soon realizes he is not at all what he appears. Just when she thinks her dreams are over, she finds herself in a hunted house with four ghosts. The mother of the ghosts pledges never to move on until she has revenge for what has happened to her and her children. Jessica’s mother, Kimberly, dreams of being in an old mental asylum.

Everything and everyone seems quite normal until the very end. Are these the nightmares the dreamcatcher has caught or are they something much different?

Kimberly Perschka’s old boyfriend got her hooked on Star Trek. She saw the first Star Wars movie ten times in the first month of its release. To say that science-fiction and fantasy is her favorite genre with mystery a close second is an understatement. That being said, it is no wonder she chose this type of story to write. Her love of reading goes along with her love of sports, crocheting, hiking, bicycling, and umpiring. A perfect day for Kimberly would be a long hike in the mountains and end up near a waterfall or lake. If there happened to be a fast pitch softball game nearby, why that would be the icing on the cake.