The second installment of Kate Scannell’s Nora Kelly series is a multi-layered thriller. The unputdownable tale takes Doctor Nora through a maze beginning at the intersection of health, corporate interests, toxic waste, and the needs of a community – but can she solve the mystery? Highly recommended! – Amazon Review 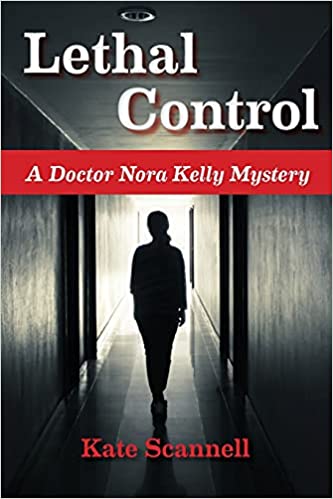 A MYSTERIOUS BLUE PATIENT IS ABANDONED AT OAKLAND CITY HOSPITAL.
Doctor Nora Kelly must outwit a powerful corporate adversary to diagnose her patient’s illness and safeguard her community.

An anonymous blue patient is abandoned at the doorstep of Oakland City Hospital and cries out for her young daughter before passing out. Doctor Nora Kelly must struggle against the clock to diagnose her patient’s life-threatening illness and mysterious discoloration. The task becomes more difficult when the patient awakens but refuses to speak with anyone on staff, fearing reprisals from immigration and child-protection authorities.

Nora suspects that her patient’s illness is caused by exposure to toxic chemicals, and she worries that others in the community may be endangered as well. But the patient remains silent. Only after learning that Nora saved her life does she agree to answer Nora’s burning questions—still, for a price. In return, Nora must deliver a confidential message to her daughter.

Nora’s end of that bargain is the beginning of a perilous journey that leads to a homeless encampment at a decrepit local stadium site. With the help of her colleagues, she desperately searches for the daughter as she also discovers that other encampment residents have succumbed to toxic exposures. Her insistent attempts to prove the site’s environmental contamination come up against powerful systemic forces and trigger dangerous personal consequences.

“Scannell lifts the veil on the life-and-death struggles taking place both inside and around the edges of an urban hospital. A fast-paced drama of overlapping lives, conflicting emotions, and the threats posed by immigration, human trafficking, and environmental degradation.” –Leslie Larson, author of Breaking Out of Bedlam

“With Lethal Control, Kate Scannell crafts a mystery threaded with social activism and environmental justice. In present-day Oakland, California, Nora Kelly is a doctor in a community hospital. When a number of desperately ill homeless people are brought into her care, Kelly is pulled into a web of intrigue surrounding the redevelopment of a local stadium site where her patients camp.

With the aid of her colleagues, Kelly investigates the site’s potential contamination. As the novel races toward its conclusion, she uncovers a decades-old conspiracy that interweaves many of Oakland’s most pressing social problems, including homelessness, environmental racism and gentrification.

Scannell excels at characterization, bringing a vibrancy to individuals from a wide range of backgrounds, from debutantes to homeless individuals. For example, Red, who plays a critical role in the plot as a guard at the stadium site, displays a poignant tenderness beneath a rough demeanor shaped by his own years on the streets.
The plot is taut and engaging… Scannell’s authorial gaze is remarkably compassionate, especially to those who have been discarded by society at large. In addition to being an intriguing mystery, the novel is a cry for social activism…”    –BlueInk Review

Lethal Control is a physician-led mystery with a strong social message…This series title includes characters from a previous volume; their introductions here are light, but their personalities are still made apparent… And the book’s mystery elements are punctuated with scenes of medical drama…These varying stories connect in the high-energy resolution, in which Nora’s fears-and her willingness to push through them-are validated…    –Foreword Clarion Reviews

Kate Scannell is a physician and author who lives, writes, and gardens in the San Francisco Bay Area. She is finally enjoying the focused time she’s promised herself to write the medical mysteries she’s longed to tell. “Immortal Wounds”—the first in her series involving crack internist Dr. Nora Kelly and colleagues at Oakland City Hospital—was published in September, 2018. The second-in-series, “Lethal Control,” followed in September, 2021.

Kate has published extensively in both lay and professional venues. She was also a regular opinion columnist (2000-2014; 2018-2020) for several Bay Area newspapers and their digital outlets, including “The Oakland Tribune” and “San Jose Mercury News” and “The East Bay Times.” Her columns explored the ethical and sociopolitical dimensions of modern medicine and health care.

In 1999, she published her memoir “Death of the Good Doctor—Lessons from the Heart of the AIDS Epidemic” (Cleis Press). The memoir relates her experiences serving as the medical director for one of the country’s first hospital AIDS wards during the early HIV epidemic years (1985-1990) when most patients suffered quick deaths. Her memoir also recounts her coming-of-age as a woman physician during this unique time. After her book went out of print, she acquired its rights and published it in digital (2010) and paperback (2012) formats (2018, with photos).

Kate also published the novel “Flood Stage,” a collection of twenty interrelated stories about people living in a diverse rural community in California whose lives are threatened when torrential rains overfill the local river. When flood stage arrives and apocalyptic flooding ensues, residents of this tight-knit community must make swift and painful decisions. Do they stay or flee? What do they choose to carry away, what do they leave behind? In moments of urgent reckoning, their unique personal histories are acted out on center stage as a universal human drama unfolds.

Kate loves medicine and patient care. She was board certified in Internal Medicine; Rheumatology; Geriatrics; and, Hospice and Palliative Medicine. She intends to stay close to these interests through her future writing.

She invites you to visit her website at: katescannellmd.com