FREE on Kindle until February 27th.

Life, Death, and Espionage: A Fictionalized Memoir by Fred G. Baker made me feel as though I was sitting with a buddy from the military while reading it. Is this a memoir based on a true story? Or fiction? Who knows, but I have to say that the author is extremely knowledgeable about the military thought and mentality that this was an awesome read.  -Amazon Review 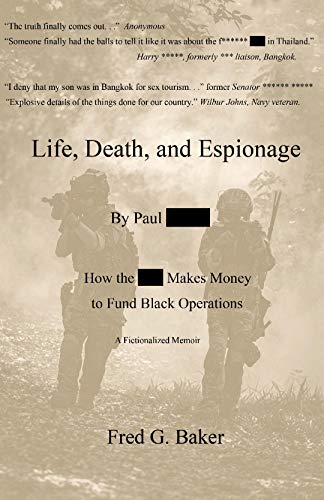 Life, Death, and Espionage by Paul

Paul Martin joined the clandestine world of a CIA contractor and was shocked by what he discovered. Well, shocked at first. Then he got with the program.

He learned how to carry out illegal field operations, conduct questionable business practices, and survive dangerous spy games, all with the approval of Section Fourteen. Who were they? They were the shadowy group that generated the cash that a certain federal agency needed to fund its black operations worldwide. You know—undermine governments we don’t like, support revolutions, fund mayhem around the world in the interest of national security.

Can this possibly be how our renowned intelligence services operate? Who says it has to make sense. It’s just the way things are in the field of espionage and making the world a better place.

Read Paul’s story and you decide if it’s a spy thriller or just another redacted memoir.

But you didn’t hear it here. Right? And Paul Martin isn’t his real name.

Is this a spy thriller or a memoir of how our intelligence really works ? Whichever it is, it’s spellbinding .Once you begin to read you’re in Paul’s world of espionage.   -Amazon Review

Fred G. Baker is a hydrologist and award winning author living in Colorado. He writes pirate stories, science fiction novels, adventures, and mysteries. Look for his story collections and novels on Amazon and Kindle, and at the author’s website othervoicespress.com. Recent works include The Modern Pirate Series of short stories about Alex the Pirate; the mystery novels, An Imperfect Crime, Desert Sanctuary and Desert Underground; the Sci Fi adventure thrillers ZONA: The Forbidden Land and Einstein’s Raven; the espionage thriller The Black Freighter, and Life, Death and Espionage. He also writes nonfiction and genealogy books and articles, scientific articles, reports, and book chapters