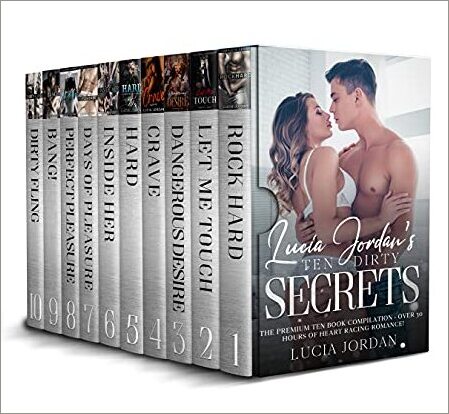 1. Rock Hard
As soon as Dallas lays eyes on Cole and Zane, she feels her body melt. She wants them just as badly as she always did. And from the way they look at her, she can tell they want her, too. But when a passionate tryst in the barn goes on a little too long, it looks like Dallas’ secret romance is not so secret anymore.

2. Let Me Touch
Will Chardonnay put a stop to the evening before things even really get going? Will Chardonnay allow herself to submit to Stephan and his dominant touch in the way her body is telling her to? And what will happen when Chardonnay and Stephan realize that the details behind their blind date aren’t exactly what they seemed to be?

3. Dangerous Desire
Victoria is instantly attracted to Carter, but tries her hardest to avoid him. She fails miserably. Victoria decides it might not be so bad to spend the weekend with him, only to have him abruptly leave. She’s left wondering what the hell happened. What starts out as a wonderful trip with sunshine, laughter, and hot encounters quickly turns sinister.

4. Crave
Around the seedier sides of Los Angeles, she was known only as J. One job. One time, and that was all she would need to get her the hell out of California. It was simple enough. At least, that is what she thought. There was no such thing as a “simple job” because sooner or later, everything catches up.

5. Hard
When Beth and Jake are caught under the mistletoe and forced to kiss, her desire for the big, dark, tattooed biker blazes hotter than ever. When later that night Jake shows up on her doorstep asking for more, she can’t resist letting him in. When Jake explains that he’s a dominant, and wants her to be his submissive, Beth suddenly has doubts.

6. Inside Her
When Tony and Cleo finally meet, his sensitivity, intellect, and uncanny insights into the characters in Cleo’s book quickly overcome her defenses. But there’s still one thing: No one but Cleo’s agent – not even her parents or best friend – knows that Cleo is Dominique Darling. Can their shared passion in Cleo’s novel turn into something more? And what sort of feelings will Tony elicit when he decides to act out a scene from Cleo’s novel?

7. Days Of Pleasure
When Danielle, a corporate banker with a boring life and a history of failed relationships, calls, she speaks with the owner, who goes only by Sir. When the night comes, Danielle waits on her veranda at the designated time wearing a dress, no panties, and a blindfold — just as she was instructed. Soon a chauffeur arrives, and Danielle, for the first time in her life, starts to live a dream that is fast becoming a reality.

8. Perfect Pleasure
After her fiancé leaves her, Lorilee’s life is left in shambles – no job, no home, no wedding. But with the honeymoon already paid for, she decides to use that time away to put the pieces of her life back together. Will a couple of weeks in a tropical paradise prove to be just what she needs, or will it take the arms of an erotically cunning gentleman to get her life back on track?

9. BANG!
One car. Two lovers. A lot of miles and one wild ride… Caryn is stuck at work without a way home. Mason has a car and is willing to help her out. Carpooling is the best solution to ensure that she doesn’t get stranded again, but miles and miles of alone time can make things intensely intimate. Mason is in the driver’s seat, and he’s prepared to take her wherever she wants to go—so long as she obeys him along the way.

10. Dirty Fling
Harley left LA behind a long time ago. There are just too many bad memories there. But waiting in LA are two sinfully hot men, her old motorcycle, and a tougher, biker version of herself she thought she’d never be again. Cooper and AJ have been waiting for her, longing for her. Things are about to get hot, and fast. Will Harley be able to keep up?