Pin It
You are here: Home / Book Reviews / Miss Angel

An engaging and amazing writing style that the author uses to portray his storyline in a post-feminist culture. Blending poetry and drama in a verse form, the writer of this book leaves no stone unturned. After reading this work, one’s life will not be the same, especially if you’re a man who feels that the present socio-political culture of America has bred a new form of racial ills through the law systems. A lot of social ills now use the law to downgrade the current American law system. The main storyline is centered on love, but other themes such as racism, religious hypocrisy, greed, and materialism are interwoven in the play to give it a broad or better flavor. I book I highly recommend. – Amazon Reviewer 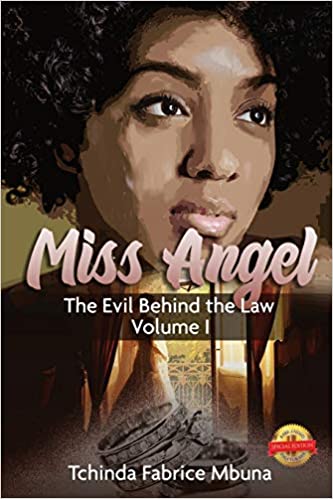 Miss Angel:
The Evil Behind The Law Vol 1

Mr. Tchinda, a Cameroonian immigrant, poet, and playwright, has just arrived in America, a nation that has witnessed the feminist movement, civil rights activities, and reforms. He has to stay with his one-time peer, Miss Beatrice, who picks him up at the airport.

Tchinda becomes legendary in the media as an African American writer. He discovers how his one-time best friend, Miss Beatrice, has been changed by the feminist culture in America. His life turns tragic when his friend, under the pressure and lust for money, wants him to marry her best friend, Miss Asunder, a native-born American (Caucasian).

Instead, Tchinda falls in love with a Cameroonian immigrant, Miss Angel. His life is rocked when Miss Asunder uses feminist laws and her status as a native-born American to fight his engagement to Miss Angel. Few days before Tchinda’s wedding day, Miss Asunder plots and gangs -up, threatening him with sexual harassment charges unless he has an affair with her. What happens next? Find out!

Tchinda F. Mbuna is a U.S.A-based Cameroonian poet and playwright, conference facilitator, public speaker, and cybersecurity instructor. He speaks both English and French.

In 2002–2004, he attended P. C. H. S Mankon-Bamenda, specializing in African and Western Literature. He wrote and performed many stage plays and won many awards in poetry and oral literature at the Franco-Cameroonian Alliance Mankon–Bamenda.

In 2004–2005, he went to Dschang State University to study English literature and linguistics, where he obtained a Bachelor of Arts in 2007, focused on poetry and African orature.

In 2010-2012, he graduated from divinity studies in New York City, Manhattan, and later obtained a second master’s degree in political science from American Public University, West Virginia, in 2017.