Pin It
You are here: Home / Book Reviews / Narco Noir

FREE on Kindle for a limited time only!

Once again, Amato’s female detective embroils herself in an adventure that is both frustrating and satisfying. It is hard to put down this book or even take a break from the action. Equal parts frustrating and mystifying, Cruz always gets two steps forward to one backwards in her quest to come to grips with her role in her own life. Can’t wait until the next installment! -Amazon Review 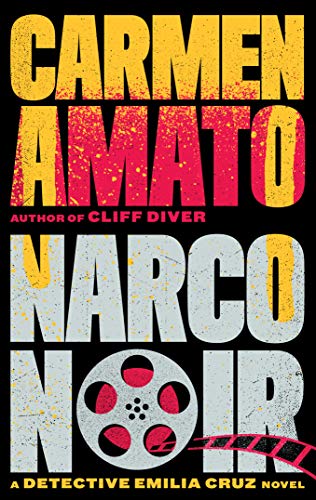 A bitter past drives Acapulco’s first female police detective into a Hollywood film starring lies and murder when she goes undercover to catch a killer. As the camera rolls, Detective Emilia Cruz will face her toughest case yet.

After witnessing the execution-style murder of a taxi driver, Emilia replaces him behind the wheel. Undercover with a false identity, her target is a shadowy gang extorting protection money from the upscale taxi service.

The homicide investigation is soon stuck in neutral. No one in Acapulco has heard of the gang. Yet the threat of another murder has all the drivers, including Emilia, scared to death.

When Emilia’s worst enemy gets into her taxi, both her life and the murder case accelerate out of control. Next stop, a movie set.

The script is a nightmare.
The director’s cut is a double-cross.
The leading man has looks that could kill.

Author Carmen Amato is a former CIA intelligence officer who uses her own counterdrug and espionage experiences to craft intrigue-filled crime fiction that keeps you guessing until the very end. Amato is a recipient of both the National Intelligence Award and the Career Intelligence Medal.

HAT DANCE
“Emilia . . . is a force to be reckoned with.”  MysterySequels.com

Carmen Amato draws inspiration from her 30-year career in the Central Intelligence Agency to craft mysteries and thrillers loaded with intrigue and action. Carmen is a recipient of both the National Intelligence Award and the Career Intelligence Medal.

Described as “A thrilling series” by National Public Radio, the Detective Emilia Cruz series was awarded the Poison Cup for Outstanding Series from CrimeMasters of America in both 2019 and 2020 and has been optioned for television.

Originally from upstate New York, Carmen was educated there as well as in Virginia and Paris, France, while experiences in Mexico and Central America ignited her writing career. Her family tree includes a mayor, a Mensa genius, and the first homicide in the state of Connecticut with an automatic weapon. The perpetrator, her great-grandfather, eluded a state-wide manhunt after killing two people–one of whom was his wife. He was never brought to justice.

Grab a free copy of the Detective Emilia Cruz Starter Library at carmenamato.net.