Pin It
You are here: Home / Book Reviews / Non-Fiction / The Mandate of Heaven 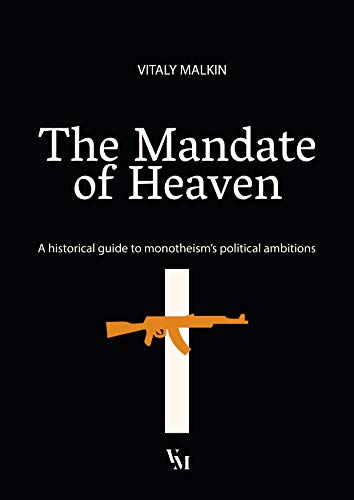 The Mandate of Heaven:
A historical guide to monotheism’s political ambitions

The similarities between Judaism, Christianity and Islam go far beyond the narratives and characters they each have in their scriptures and their related origin. It’s a far more sinister connection. Not only do these religions each assume that their God has ultimate power, that their God knows everything, is always right, and answers to no one.

They also try to establish political control, claim a monopoly on the truth, suppress or eliminate those who disagree with them, and cannot stop engaging in extreme violence and terrorism in support of their beliefs. What causes today’s Islamic terrorism? Similar violent phases in the linked histories of Judaism and Christianity are conveniently forgotten but nothing other than religious belief causes religious violence. What can be done about the threat posed by monotheistic religions to humanity? Radically new approaches are proposed in this comprehensive history and review of the development of monotheism.

Vitaly Malkin is a Russian businessman and investor. He has been a physicist, banker and senator (from 2004 to 2013).

Malkin became interested in philosophy and history of religion while engaged in his philanthropic activities for the Fondation Era and Fondation Espoir, and from his extensive travels around the world. Living now in Europe, Malkin has fully dedicated himself to writing and to continuing his work as a philanthropist.

Find out more at: www.vitaly-malkin.com