“I thoroughly enjoyed OATH SWORN with its exquisite writing and confident storytelling.  The world building is immense. Everything from the complex social structure (and names), to the religious beliefs and practices is so thought out and well presented, that it’s completely believable.  Meg MacDonald is an exceptional writer.”   —Tara Ellis, Amazon best-selling author of The Forgotten Origins Trilogy 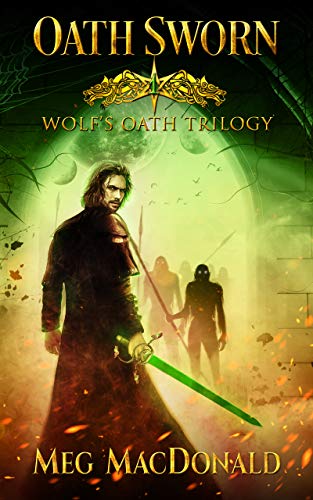 Defending Lian against soulless assassins is not what Aralt “Wolf” syr Tremayne agreed to.

Nor did he agree to be the guardian of an irrational teenaged Keeper of the Faith.

And he certainly did not plan on sky pirates or cannibals.

Aralt has his hands full.  The Grand Meeting of the Northern Alliance is mere days away and Lian Kynsei, last of the soul-touched and missing for three years, turns up on his doorstep.  A noble man of his word, Aralt has every intention of protecting his ward, but did he have to show up now?  What’s worse, the more they get reacquainted, the less Aralt likes him.  He’s reckless, emotional, and when he’s angry even the weather changes.  This is the hope of a nation?

Armed with the Tuned sword that is all he has left of his murdered brother, Aralt endeavors to secure a sanctuary for a reluctant heir-apparent who never anticipated his elevated status.  But sanctuary proves elusive, every step bringing them closer to danger–and closer to revealing secrets neither wishes to share.  The enemy has made the skies their own and unleashed a scourge intent on killing Lian–or worse.  Death, Aralt realizes, might be the greater mercy.

In the world of OATH SWORN, cultures and ideologies clash, jewelers “Tune” crystal swords, skyships sail above tidal extremes, and the soul-touched–like young Lian–inspire both awe and fear.  It will take more than determination to survive the adventure upon which Aralt and Lian embark…more than devotion to a sacred oath.  It will take courage–and no small amount of faith.

When she isn’t herding cats, Meg Mac Donald writes fantasy and science fiction from her home in Michigan. She tends to delve deep into the psyches of complex characters and is known for a rich, lyrical style and the sort of character-driven stories that remind readers of C. S. Friedman, Anne McCaffrey, and Lois McMaster Bujold. Said one reader”If Anne McCaffrey wrote Wuthering Heights…it might be something like Oath Sworn.”  Oath Sworn is her debut novel and the first in what has been described as her “second world gaslamp, gothic fantasy” Wolf’s Oath series.

An avid reader of SF, she began writing the stories that would lead to Oath Sworn and the Wolf’s Oath Trilogy when she was in high school–and is glad that internet fiction sites did not exist then or else she would be forced to wear a bag on her head now. She has trained dogs and horses, rescued cats, renovated old houses, hiked the Grand Canyon, gone spelunking, and fostered and adopted children. Her husband thinks she’s cute, her kids think she’s weird, and her cats just want her for her lap. She loves woolly mammoths, Coca-Cola, men in kilts, and has never been to the moon, but hope springs eternal.

Meg’s short fiction and poetry have appeared in Weird Tales, three Darkover anthologies, The Temporal Logbook, and other short story anthologies both in print and online. She was the editor-in-chief of the semi-pro SFF magazine PANDORA back in the day and credits that experience with nurturing her love of short fiction, honing her critical skills–and probably delaying her writing career by at least a decade because she was so busy reading and working with emerging authors. And she loved every moment of it. Mostly. Sometimes there just isn’t enough brain bleach for the things that turn up in slush piles.