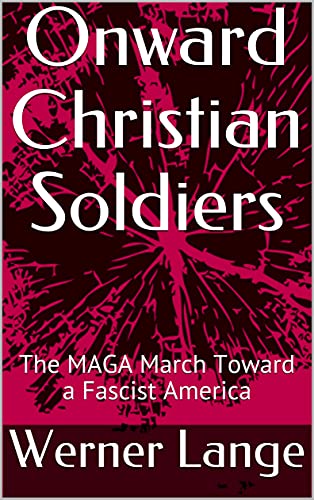 Onward Christian Soldiers:
The MAGA March Toward a Fascist America

The MAGA making of American fascism almost succeeded. Whether or not it ultimately does in the future depends upon the extent to which the vicious viper which reared its ugly head on January 6 in the nation’s capital is defanged, if not decapitated altogether.

Thus far the imstitutional response to this fascist putsch has been too meek and the public shock too mild. The majority of the participating domestic terrorists have not even been identified, let alone arrested and prosecuted.

Next to nothing has been done to their congressional enablers and supporters. And precious little light has been shed on the core social base of this extensive MAGA movement, namely Christian fascists. Most commentary on the deeply embedded fascist nature of Trump’s social base euphemistically dismisses it as merely Christian nationalism or conservative evangelicalism, racist manifestations of hijacked Christianity which have been part of American history for centuries.

Such myopic misrepresentations of this qualitatively new and ongoing threat fo American democracy fail to grasp the grave danger of the MAGA movement as an unprecedented fascist force with deep roots in our frayed social fabric. This analysis aspires to overcome that myopia and sound the alarm.

Werner Jürgen Lange was born in the rubble that was Germany after the fascists got through with the Vaterland, and raised in material poverty in America during the1950s. Anti-fascism is embedded in his DNA. A modest loan through the National

Defense Education Act enabled him to enter The Ohio State University, where he earned a B.A. in sociology and a M.A. in anthropology. Further graduate studies at the Frankfurt School of Critical Sociology and the Frobenius Institute resulted in his ?first doctorate awarded by the Historical Sciences Division of Johann Wolfgang Goethe University based upon ethnological research in southwestern Ethiopia. His second doctorate, one based on research into social ministries, was earned at Ashland Theological Seminary. In 1996 he was ordained by the United Church of Christ, and served as pastor of three small congregations over a ten year period.

For most of his adult life, Rev. Dr. Lange taught sociology, religious studies and philosophy at several US universities, the last one being a Catholic institution, Walsh University. He is the author of several professional publications on race relations, inequality, social movements, the social gospel, and the life and legacy of his role model scholar-activist, W.E.B. Du Bois. His most recent publication appeared in the May 2021 edition of Peace Studies Journal, “In Pursuit of Peace Where Freedom Chokes: W.E.B. Du Bois Confronts the Cold War”.

He and his wife Roxanne are the parents of five adult children who blessed them with ten grandchildren ranging in age from 20 years to two months. In 2022 they celebrate the golden anniversary their wedding which took place in Addis Ababa.