Most books about step-parenting were written by qualified experts. This one was written by a bumbling amateur who figured out what to do as he went along, so it’s chock full of humorous learning experiences and embarrassing mistakes! -Amazon Review 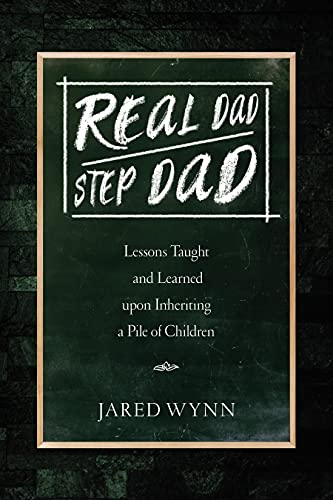 Real Dad/Step Dad:
Lessons Taught and Learned upon Inheriting a Pile of Children

He met his wife, then he met her kids, and then he met the man who abused them. And that’s where it all went to hell.

“Real Dad/Step Dad” is the true story of one man’s experience rebuilding a broken family while dealing with constant opposition from the man who broke it. Turns out the secret to success was more simple than anyone imagined…

“A candid, honest, and interesting book about step parenting written by a stepparent that relives the mistakes, experiences, lessons, and narrative of being a stepparent that if shared with other stepparents and step kids can help them prepare for the game of life and relationships, and the challenges that lie ahead of them in a world where divorce and remarriage is commonplace. Engaging book.” – Amazon Reviewer

“Must read for anyone with kids. I like author’s conversational and down to earth writing style. Well researched book. Highly recommended!” – Amazon Reviewer

Jared Wynn spent his formative years in Latin America, Eastern Europe, and the Middle East as an expat and diplomatic dependent. After what felt like several lifetimes overseas, he returned to America to pursue a higher education while bouncing around between odd jobs. To date, he’s been a cook, a bouncer, a geophysical technician, a hypnotherapist, a Jujitsu instructor, and a standup comic, all of which he thinks makes him a better writer but which probably just makes him eccentric. He currently resides in Southern California with his wife and three stepkids.