Pin It
You are here: Home / Book Reviews / Rick With A (Bipolar) View

Every once in awhile there is a book that you just know is an important one. That people must read it, must talk about it, must share it. That our voices must be heard so the book will reach the people who need to read the words. -Goodreads Review 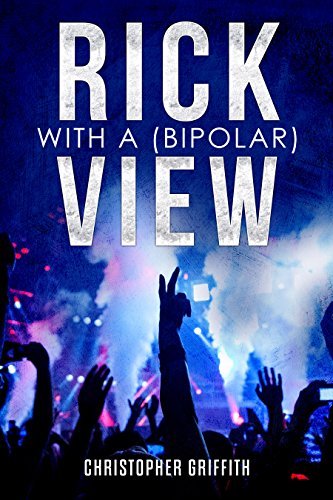 Rick With A (Bipolar) View

Rick is wracked by the ravages of mental illness. Bipolar disorder, to be exact, although being just a twenty something he still has enough optimism to see himself through the vagaries of depression and anxiety.

His friendships help him, and his love for Lucy, and then there’s his passion for electronic music: Rick doesn’t want a job behind some desk, he wants to be a superstar DJ.In this coming of age novel, we follow Rick through a week of his life, a week in which he must as ever work through and with his mental illness, treading the tightrope between sanity and bipolar disorder, stability and depression, peace and anxiety, and all whilst he’s dealing with the fluctuating love of friendships for his mates, his sister and his girlfriend.

As the climax of the week approaches, two paths lie open for Rick – an interview on Thursday with the possibility of seeing his twenty something years morph into mundane, calamitous thirties, or a DJ gig on Friday when electronic music could win the day and see his coming of age crowned by a possible cure for his mental illness, the melody of the music overcoming bipolar disorder, depression and anxiety alike.

Every once in awhile there is a book that you just know is an important one. That people must read it, must talk about it, must share it. That our voices must be heard so the book will reach the people who need to read the words.

I found this book and its wonderful story gently drew me in from the first page. The characters are interesting, and so very real. The story deals with mental illness, sanity and bipolar disorder, stability and depression and anxiety, but the story unfolds so beautifully that it feels a privilege to glimpse the inner world of the main character Rick and share his life as it unfolds.

he most important part of this novel for me though was how I could really see the impact of mental illness. I understand mental illness but to see it through a character’s eyes like this was really an ah ha moment. I really began to understand just how hard it is. How helpless you feel. Just an extremely powerful, emotional ride. I highly recommend this book.

I looked forward to my reading time with this novel and the chapters made it easy to squeeze in just a little bit more time with Rick and his story. This is one of my favorite books this year.

– Reviewed by Augustina Franceschini on Goodreads

Christopher Griffith loves television, electronic music, Matthew, poetry, rip-roaring conspiracies, supermarkets, fantasy fiction from The Lord of the Rings to Harry Potter, and anything Shakespeare. He writes upon these subjects that in study of them he will hopefully interest others, and learn thereby himself! Christopher’s author website can be found at :  www.williamottowaysutopia.com