99cents for a limited time only. 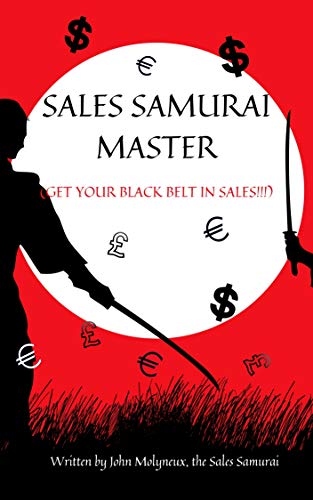 SALES SAMURAI MASTER:
GET YOUR BLACK BELT IN SALES!!!

John decided to write this book for a couple of reasons.  One is that he is passionate about sales and martial arts, and two, he wanted to share his knowledge with the world!!

Many years ago when he was in his early 20’s he decided to join the British Army, not because he particularly wanted to be a soldier, but because he found it tricky to find a full-time job. He stayed in the army for a few years and spent some time-based in Germany, but, soon realized it was not a career he wanted to pursue.

Even though it did not work out he took away some serious life skills. Including discipline and tenacity (maybe even a little stubbornness, but hey nobody is perfect!!).

For the next few years, he was kind of lost for direction, falling into lines of work like truck driving, and, security which a lot of ex-military personnel seem to do. After doing a bit of traveling he relocated to Cornwall (England) where he came across an opportunity to learn karate and become a sensei enabling him to teach public classes.

This is where his sales journey began !!

Not only was he learning to teach karate, but he was also canvassing door to door to enroll new students in the classes. This enabled him to sharpen his sales skills, and, he was going from door to door for around 5 years, in which time he also achieved his black belt.

Since then he has moved on from karate to study and compete in other arts, but kept his sales career going. He did everything from cold calling on the phone, to affiliate marketing, closing 4k services, and more recently selling business to business.

This is a compelling story of an everyday guy using the skills that he’s picked up over the years, and now, he wants to pass them on to you through his coaching business.