Pin It
You are here: Home / Book Reviews / Saving Each Other

FREE on Kindle until November 30th.

A well written story with three dimensional characters and – may I say – a three dimensional plot to go along with the rather brilliant cast! That is quite often an extraordinary plus in itself for any romance tale. While its authorship is female – it was well balanced enough such that the average male reader is not distracted by any latent emotional fog or any sense of an over-thought out plot. In the genre – ‘Saving Each Other’ is a uniquely well written bright spot in what is often an otherwise mechanistic book factory approach to romance writing. If any romance reader is tired of the same well worn plots and simplistic storylines – Capri Posey has constructed a fantastic alternative – a refreshing offering that will bring many smiles to nearly every reader. Well done! Highly recommended! -Amazon Review 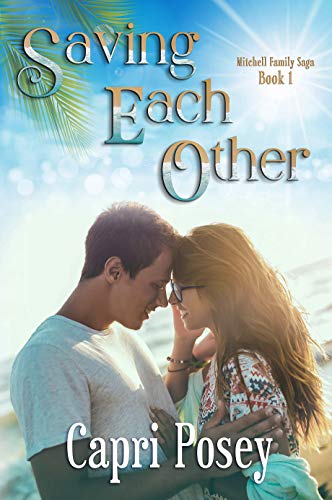 Saving Each Other:
A Sweet Romance with a Dash of Thriller

Maria is an inexperienced vocational nurse desperate to get out of Los Angeles. When she uploads her résumé to an employment site, she never dreams it could lead to being considered by the famous jet-setting Mitchell family who live on a remote tropical island.

Brian is a rescue pilot who wants to settle down, but is far too busy to play the dating game. He never dreamed that Grandma’s nurse might turn out to be everything he ever wanted, delivered right to his doorstep.

Neither are aware that they are being stalked and targeted by a deranged serial killer, bent on destroying all that they hold dear.