Pin It
You are here: Home / Book Reviews / Self Coaching: 55 Questions To Ask Yourself

Only 99cents until November 30th.

This is really an amazing wonderful book which is about Life and our day to day problems in our life On how we can fix that, procastinations, distraction , goals etc.. I love this book I’d be reading this book again sometime soon. – Amazon Review 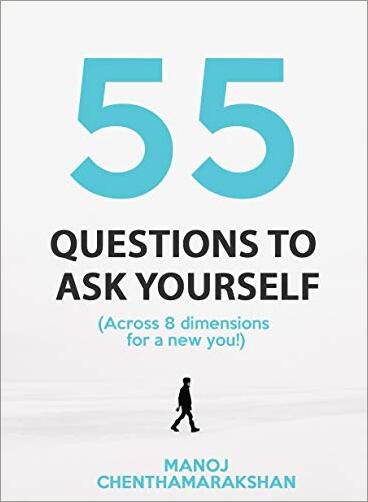 Self coaching:
55 Questions to ask yourself, Across 8 Dimensions For A New You!
(Self discovery,Purpose,Talents)

Use these powerful self-intriguing questions to reveal your hidden potentials

Do you know that questioning yourself is one of the powerful ways to unlock some hidden things about yourself that you never knew? By asking the right questions, you will unravel interesting versions of yourself. In this book, I have specially crafted coaching questions used by life coaches to unveil the answers from you.I would recommend you to use a partner to question each other to get better results. It is all fine to go it alone, but you will make far more progress if you involve another person in the process. This is because we tend to answer in depth when someone else asks the question. We tend to think deeply so that the answers we provide are concise and complete. You may think that you are bringing clarity to the other person but the truth is you are bringing clarity to yourself.
Here is a preview of what you will learn

Manoj Chenthamarakshan is a Life coach, Author, and the founder of The Positive Store E-commerce platform formed in 2018 to help people lead a positive and productive life. Manoj completed his school at Coimbatore. He was a below-average student, unaware of passion and purpose in life. Since he had no exposure to the vast world, he decided to undertake a B.S.c in Computer science, believing he likes computers. Later after one semester, he realized that he had no passion for what he was studying. He was introduced to the movie “The Secret” by Rhonda Byrne during an English period which he then didn’t realize it’s going to change his whole life forward. His interest in self-help gradually increased.

At the age of 22, he got a well-paying job and successfully became a graphic designer. He earned his dream bike and lived a lifestyle that he dreamt of. But later came a day where he was invited to a party. He was asked to introduce himself. He was not happy with the title of Graphic designer.

This incident made him think about his Identity. “Who am I?”. Later he decided to figure out his passion and purpose. He knew that he couldn’t find it by staying in the job. So he decided to quit his job and decided to go on a solo trip to north India.

?After two years of researching and self-exploration, he realized that he was surrounded by great books such as “The secret,” “Think and grow rich,” and “Power of your subconscious mind.” Everything started connecting when he looked backwards.

This awareness helped him to discover NLP (Neuro-Linguistic Programming). He completed the course in Bangalore and worked as a trainer for a year. Knowledge was in abundance, but the results were poor. It took few years for him to realize the knowledge is of no use if not practised. He later decided to structure his life and started creating planners, bringing in his accumulated knowledge throughout the years.

?Thus formed “The Positive Store”. Currently sold more than 50,000 products worldwide. During this journey as an entrepreneur, he also found his passion in expressing his ideas through words, which made him write books such as “25 small Habits “, “55 questions to ask yourself,” and “Know Thyself,” which are available on Amazon. These books were ranked as a best seller at amazon for more than a year.

At present, 2021. He is into minimalism, where he focuses on minimizing the efforts and maximizing the results. New projects and new products are on the way with a minimalist approach. 🙂