Pin It
You are here: Home / Book Reviews / ShockWaves

FREE on Kindle until February 25th.

Just wow. This is such a fast moving book, and so exciting. I will read the following up in this series. Is this YA book? Thought I read it was. Well it is for all ages, believe me!!!!! – Amazon Review 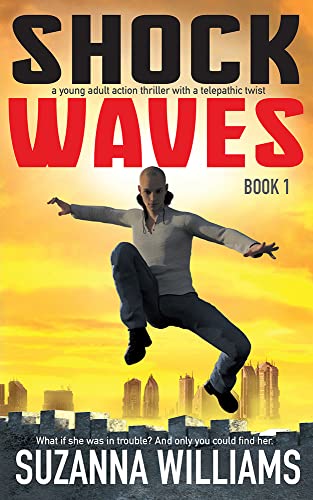 She’s been kidnapped. If he can’t find her, she’s dead.

Sixteen-year-old Lee Banner spends his time free-running, and trying to forget about his foster home, his dead-end Saturday job, and the bizarre images that randomly hi-jack his head. (Because telepathy only exists in science fiction, right?)

Paige Harper has lived her fifteen years with doting, if somewhat paranoid parents, and every luxury money could buy. But her father’s testimony put ex-IRA terrorist, Conall O’Shea, in prison. Now he’s out. And he’s hell-bent on revenge.

When Conall kidnaps Paige, those visions that Lee dreads are her last chance at survival.

Will Lee’s telepathic ability, and that stubborn streak which gets him into so much trouble, be enough to find Paige before it’s too late?

ShockWaves is the first in a new fast-moving, action-packed young adult adventure trilogy. If you like twisted villains, crazy fights and chases, and a touch of romance, then you need to read the ShockWaves series.

Click Buy Now to experience ‘ShockWaves’ in your brain.

Suzanna Williams is a perpetually eighteen years old YA author who lives in the wild, wet, Welsh borderlands surrounded by ruined medieval castles and Celtic mythology where she looks for UFO’s amongst the stars and imagines all the people she meets have dark secrets.

When she is not inventing radical problems for her unsuspecting heroes and plotting their escape, Suzanna is a serial collector of random badly paying jobs and has never found a use for her BSc in Psychology whatsoever.

Suzanna loves sci-fi action adventures, playing the piano, believes Romeo and Juliet should have talked more and considers sarcasm to be the highest form of wit

You can find out more by visiting the website at www.suzannawilliams.com or say hello on facebook www.facebook.com/#!/SuzannaWilliamsAuthor

Suzanna also writes picture books for children under the name SuzieW. Check out the website at suziew.com