It was a great book very direct and to the point. I appreciate that the author didn’t simply fill the book with fluff and actually gave real relatable advice. -Amazon Review 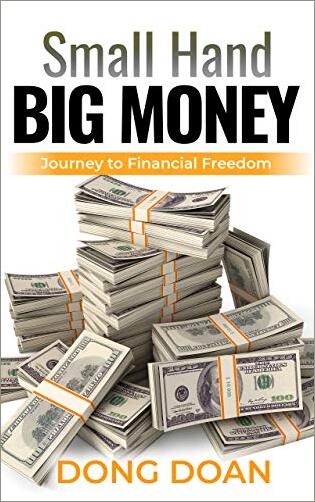 Have you ever wished to be rich and fly around the world on your private jet or just have enough money to feed your family? I have been there, and this book will depict my journey of finding financial freedom.

Do you remember when you were smaller how small your hand was and how big a quarter was in your hand or how big a dollar was? Now that you are bigger, your hand grew, but money slips out your hand like you are still a little kid. It is time for that to stop!

Dong Doan, My parents were the first generation. They were the immigrants. They both taught us a lot of stories. My father would tell us that the Vietnamese American had a big disadvantage in America due to social view on Asian in America. That was just one of many things about being Asian American that away stuck in my mind. He knew that we as American-born Vietnamese kids really had no way of connecting with Vietnamese except through his eyes. This was at the same when he and my mother and other Vietnamese Americans suffered great discrimination. Throughout that, he would still try to imbue us with a great sense of dignity and a sense of who we are as Vietnamese.

For me, as a second-generation, American-born Vietnamese, that is the struggle of our parents’ generation. They want us to hold on tight to those elements of Vietnamese culture. But I’d never been there. I identified much more with hot dogs, apple pie, baseball, Chevrolet. The relationship between child and Vietnamese parent was often a struggle between the two cultures. The values I knew and was learning were as an American kid. I was also trying to bridge this notion of being Vietnamese. My parents’ interpretation of being Vietnamese was very traditional. Their world was Vietnamese and struggling to survive in America. For me, it was the opposite. America is my familiar world and Vietnamese is something I have to learn.