Pin It
You are here: Home / Book Reviews / So You’ve Still Got Fibromyalgia 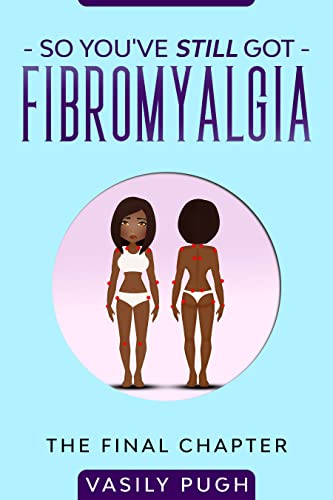 So You’ve Still Got Fibromyalgia:
Yet more bouncy symptoms and delicious misery.

So You’ve Still Got Fibromyalgia then? The last book didn’t help, did it? This book probably won’t help either. BUT isn’t it nice to at least read something that confirms you are sane?

That the strange pain and sensations you experience are all connected to an illness with a particularly sexy name. ‘F-i-b-r-o-m-y-a-l-g-i-a’ – just uttering it makes is like Kenny G and scented candles.

After looking at a good portion of the twists and turns of the mysterious illness, Vasily Pugh, Fibro-sufferer and bloviating windbag of no repute, launches the final chapter. A look at those maddening, upsetting and frequently misunderstood symptoms of the illness.

Whether you suffer from Fibromyalgia, know someone who suffers from it, have been mugged by someone who has it (unlikely) or think ‘it’s all in your head’, enjoy another mercifully short account of one man’s trials and tribulations with the illness.

Reviews from Book ONE:  So You’ve Got Fibromyalgia: An Irreverent Look at a Chronic Illness

I loved how relatable this was. I’ve recommended it to my family as something to read that might help them better understand what I’m experiencing. It was a very funny read, since I have a similar humor to the author about my fibromyalgia and related stuff. -Amazon Review

A very relatable read. If you’ve met one person with fibro you’ve met ONE person with fibro! Though our personal experiences differ there are common themes. There were several ‘high five’ moments for me. I’m in no doubt that you’ve barely scratched the surface as to other unwelcome symptoms that you endure and could probably write a whole box set to accompany this witty, honest and touching insight into the life of a person constantly finding ways to remain sane whilst living with a totally bonkers disability. -Amazon Review


What will YOU say about Book Two? So You’ve Still Got Fibromyalgia: Yet more bouncy symptoms and delicious misery

First of all – and this goes against my diffident nature – can I please ask that you leave a review.

Secondly, excuse the image – Amazon insist that I have an image of myself and this the least offensive version available. I tried putting a picture of my infinitely cuter dog, but apparently that just will not do; readers want to see the grim, grey face behind the verbal mince, perhaps to stop me selling any more books. Would YOU buy a used car of the guy in the picture?

There is news and information regarding upcoming releases. The mailing list, which I would of course appreciate your patronage of, will also offer exclusive Pugh style content.

Hello, I am Vasily Pugh and thank you for reading this short piece. My first book was the oddly prescient ‘Basically Frightened’ – a darkly comic pandemic thriller.

This book was followed by acclaimed comic thriller ‘The Insomniacs’ Club’ which successfully transferred to Ulaanbataar as an award winning kabuki show.

‘Outside Looking Out, the even better sequel to ‘Basically Frightened’ was the next book.

Upcoming book ‘Gusto’ is out by the end of the summer. Strong female characters, tightly-wound tension, ambiguity – I can almost taste the international recognition and appreciation.

I have recently released ‘So You’ve Got Fibromyalgia’, a short book on my battle with Fibromyalgia. I say ‘battle’, but it’s more of a pillow fight. Only the pillows are filled with rusty nails.

I do have a tendency to use ‘passive voice’ in my work which puts me in league with some of the great war criminals according to the Grammar Coalition. But hey, maybe we can live in a crazy world where active and passive can co-exist, weaving daisy chains and dancing.

I have recently become a Vine Voice, partly because I’m beginning to appreciate how good it is for people to give and receive reviews. And so it is that we return to my craven request:

Please leave a review. Amazon likes to purge the good reviews for alleged bias, meaning my average rating oscillates wildly. Not very helpful for an independent author so your support is appreciated.