Picked up this quick read on a whim— did not expect to enjoy a story of musical collaboration as much as I did. As the text states, “…a modern mythic journey.” – Amazon Review 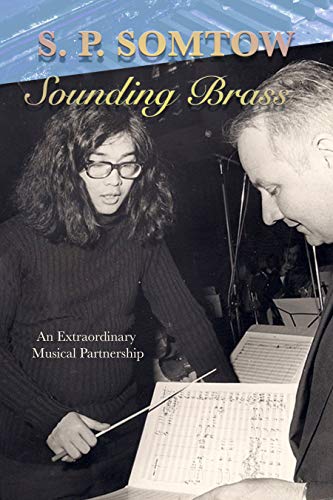 An extraordinary tale of a collaboration between a composing prodigy and a Washington politician, the story of how a Thai schoolboy came to create the entire oevre of an American composer is fabulous in the true sense of the world … a modern mythic journey.

A true story … yet one that beggars belief … with cameo appearances by all sorts of members of the Washington “swamp” … and the odd science fiction writer dropping in for a chat.…

“It’s a story about the human need to want to break boundaries and exceed limitations. It’s about dreams and aspirations, and in the end we need to ask questions about the very nature of art and about why we as humans need art in our lives.

“It is also the story of two people from vastly divergent cultures, two people who both, perhaps, felt alienated from the people and situations that surrounded them, and who came to share a strangely intimate bond.”

A never-before-told secret history, this memoir by the first Asian to be awarded the European Cultural Achievement Award is an eye-opener.
***

“Once upon a time, almost half a century ago,” this diary begins, “I was a college student in an elevator at an exclusive club in Washington, DC. The elevator was filled with important people — admirals and such — and I was trying to look as inconspicuous as possible, considering I was a long-haired Asian attired in quasi-hippie garb. As the elevator descended, they began discussing the Secretary of the Navy, one J. William Middendorf, the Second.”

One of the Very Impressive Persons said, “What do you think of Middendorf’s music?”

“I heard a rumor,” said the first, “that it’s all actually composed by some young oriental guy.”
***
Thus begins the wild story of the bizarre collaboration between a powerful American politician and a long-haired 17-year-old Thai music student that produced seven symphonies, an opera, dozens of concertos, rhapsodies, ballets, and occasional pieces, and over a hundred marches in just over a decade.

In a wryly ironic voice, S.P. Somtow, who composed and conducts opera under his given name Somtow Sucharitkul, spins a tale that is like a symphonic version of “Forrest Gump” — only it’s true. This is a memoir with cameo appearances by the Queen of Holland, Isaac Asimov, the Grateful Dead, Oliver North, and the Governor of Bangkok. All-night orgies of playing C major scales, evenings of eating corned beef hash under a real Rembrandt in an ambassador’s living room, taking notes on the Secretary of the Navy’s humming while top brass waited for their marching orders, dashing off marches while wolfing down American sitcoms … fifty years later, it’s time now for this story to emerge.

S.P. Somtow says of the autobiographical fragment: ” It was the union of Mantovani with Schoenberg, and it should have been a marriage made in hell, but somehow, it came off.

“I started to write this book because I am afraid that one day someone will take the bones of this story and add to it a different kind of flesh. It could easily be made into a hatchet job, but that would be missing the whole point of it all.”

I started reading this book partly because I had the chance of knowing the author and working with him. And as the story unfolded, it just became so much more than a recollection of a strange partnership: it it’s actually a deep reflection on what it is to be an artist, and how you become one. Fascinating. ….  -Amazon Review

Once referred to by the International Herald Tribune as ‘the most well-known expatriate Thai in the world,’ Somtow Sucharitkul is no longer an expatriate, since he has returned to Thailand after five decades of wandering the world. He is best known as an award-winning novelist and a composer of operas.

Born in Bangkok, Somtow grew up in Europe and was educated at Eton and Cambridge. His first career was in music and in the 1970s, his first return to Asia, he acquired a reputation as a revolutionary composer, the first to combine Thai and Western instruments in radical new sonorities. Conditions in the arts in the region at the time proved so traumatic for the young composer that he suffered a major burnout, emigrated to the United States, and reinvented himself as a novelist.

His earliest novels were in the science fiction field and he soon won the John W. Campbell for Best New Writer as well as being nominated for and winning numerous other awards in the field. But science fiction was not able to contain him and he began to cross into other genres. In his 1984 novel Vampire Junction, he injected a new literary inventiveness into the horror genre, in the words of Robert Bloch, author of Psycho, ‘skillfully combining the styles of Stephen King, William Burroughs, and the author of the Revelation to John.’ Vampire Junction was voted one of the forty all-time greatest horror books by the Horror Writers’ Association, joining established classics like Frankenstein and Dracula. He has also published children’s books, a historical novel, and about a hundred works of short fiction.

In the 1990s Somtow became increasingly identified as a uniquely Asian writer with novels such as the semi-autobiographical Jasmine Nights and a series of stories noted for a peculiarly Asian brand of magic realism, such as Dragon’s Fin Soup, which is currently being made into a film directed by Takashi Miike. He recently won the World Fantasy Award, the highest accolade given in the world of fantastic literature, for his novella The Bird Catcher. His seventy-plus books have sold about two million copies world-wide. He has been nominated for or won over forty awards in the fields of science fiction, fantasy, and horror.

After becoming a Buddhist monk for a period in 2001, Somtow decided to refocus his attention on the country of his birth, founding Bangkok’s first international opera company and returning to music, where he again reinvented himself, this time as a neo-Asian neo-Romantic composer. The Norwegian government commissioned his song cycle Songs Before Dawn for the 100th Anniversary of the Nobel Peace Prize, and he composed at the request of the government of Thailand his Requiem: In Memoriam 9/11 which was dedicated to the victims of the 9/11 tragedy.

According to London’s Opera magazine, ‘in just five years, Somtow has made Bangkok into the operatic hub of Southeast Asia.’ His operas on Thai themes, Madana and Mae Naak, have been well received by international critics.

Somtow has recently been awarded the 2017 Europa Cultural Achievement Award for his work in bridging eastern and western cultures. In 2020 he returned to science fiction after a twenty-year absence with “Homeworld of the Heart”, a fifth novel in the Inquestor series.