Pin It
You are here: Home / Book Reviews / String of Pearls

Really enjoyed this reading this book. I like the central premise about the different worlds being connected and also that it’s not just one person with special gifts, but rather anyone can be a Giant if they evolve in the right way. I also liked the characters. The second half in particular was really good in terms of the action. I read this because I have YA readers in my family and wanted to see how this series was and I’m going to recommend it.  -Amazon Review 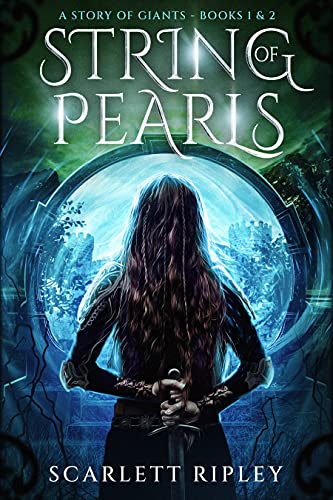 String of Pearls:
A Story of Giants Books 1 & 2

Books 1 & 2 of the fantasy series A Story of Giants in a single volume PLUS an expanded Book 1.

A reluctant young warrior fights dark forces and her own past to protect those who keep watch over the endless realm of worlds.

Our world is but one of many, like pearls on an infinite string. Only those among us whose gifts have awakened, the “Giants,” can travel the string of worlds and watch over balance in the realm. Join 18-year old Leanna Salinger and her sister Violet as they emerge as Giants, just as their grandmother years before, and fight dark forces threatening the Giants’ peaceful ways.

Part I: College freshman Leanna is a reluctant Warrior Giant, her sister Violet is a Sensor. They join the ranks of the Giants, but for a self-proclaimed loner like Leanna, training with Warriors from other worlds is not so easy. Her heart is closed to everyone beyond her sister. When insurgents move to assert power over the realm, Leanna and her compatriots embark on a multi-world quest to stop them. To survive, Leanna must conquer a tragic past which has come to define her and open her heart to the people who love her.

Part II: Leanna gets trapped in a parasitic realm known as the Shadow Realm, replete with sorcery and the dark arts, wild creatures, demigods, criminals, and innocents. The sole way home is to voyage to the outermost lands of the west, where those with extraordinary magic create tokens for exit. But before she can reach the tokens, a leading criminal in the underworld kidnaps Leanna, planning to use her as leverage for an escape of his own.

Scarlett Ripley’s series “A Story of Giants” is a fantasy series based on string theory. She loves to blend fantasy, science fiction, adventure, romance, and psychological study in her writing, given her stories a broad appeal beyond traditional fantasy-genre books. All of her writing features strong female protagonists.

In addition to the continuing “A Story of Giants” series, Scarlett is working on a modern-day gothic romance, “Death Knows,” among other projects.

Scarlett lives in London, England. Scarlett loves to hear from readers and encourages them to get in touch with her via her website: scarlettripley.com.