Pin It
You are here: Home / Book Reviews / Taking Fear Out of Math:: A Self-Help Guide for Parents and Students

“I was feeling like a fraud, homeschooling my kids because we moved so often, buying every curriculum to make up for my guilt. Along came Mr. Siegler with his story. And: Click! And the kids got it.
Now, One’s an engineer and the other a teacher.   Thank you, Mr. Siegler.” 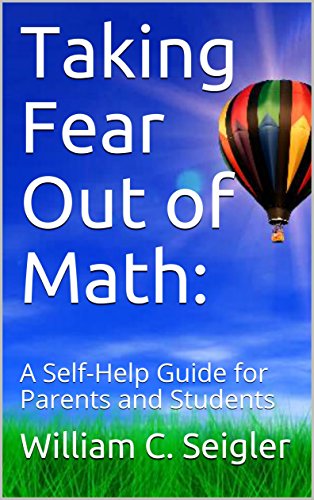 Taking Fear Out of Math::
A Self-Help Guide for Parents and Students

This book is for you if:
– You have ever struggled in math class and still failed the course
– You have been unable to help your children with their math homework
– You have passed a math course but was not really ready for the next more advanced course
– You tutor struggling students
– You are having trouble with math in science classes
– You realize that your lack of math skills hurts your income potential.

I was like you until I found a truly gifted teacher. I walked into that man’s class a math-paranoid and walked out a math-freak. My notes from his class and his handouts form the basis of this book. I have tutored students who were terrified of math and had them succeed. I have taught geology at colleges for the last fifteen years. I have also taught remedial math in college and high school geometry and algebra.

I know I can help you help yourself.

William C Seigler was born in Anderson, South Carolina. William discovered early on, a desire to see the world. While in the Army, he lived on the economy in Germany and worked on his German while making friends with the locals. He backpacked the Black Forest, visited the World War II concentration camp at Buchenwald, drank excellent beer at Oktoberfest in Munich, day hiked in the Swiss Alps, met a beautiful girl in Paris, consumed fish and chips late at night in London, and stood on the Acropolis in Athens. Later, William traveled by ship to Antarctica on a magazine assignment, flew cargo jets, and traveled in the U.S., Canada, and Mexico. He received an MS in geology from the University of Texas at El Paso and now teaches geology at Weatherford College in Texas when not bow hunting, kayak fishing, or writing. He somehow managed to marry the prettiest Mexican girl and best cook west of the Pecos. He and Maria have a son. All these experiences and the people met are woven into his tales. These stories often deal with men and women struggling to live their lives free of the statists-collectivists.

You can find out more about William Seigler on his website:  williamcseigler.com