Pin It
You are here: Home / Book Reviews / The Albatross: Contact

I was blown away by this book. With descriptive, gritty action scenes, a plot that thickened and turned, and a compelling narrative from three very different perspectives, it was upsetting reaching the last page and realizing I’d finished the book. But thankfully, the story of the Albatross crew is far from over. If you liked the action of Aliens and Starship Troopers, the complexity of Interstellar and Star Trek, and the narrative style of Game of Thrones, then I highly recommend this book. – Amazon Review 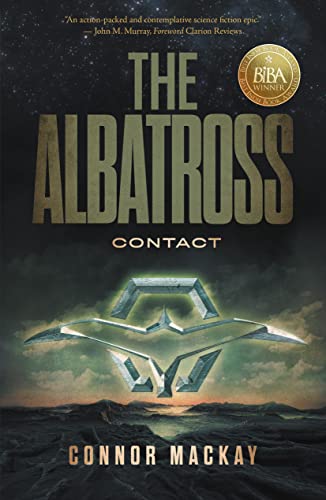 There’s no invasion, no unfortunate probes, and no misunderstanding. The Lumenarians have come desperately seeking our help. Light years away in the Large Magellanic Cloud, a shadowy race known only as the Forsaken is decimating their people, and the Lumenarians have arrived on Earth to recruit humankind as soldiers. Equipped with new weaponry and biotechnology that gives them devastating abilities, the Terran volunteers are thrust into the middle of a vicious interstellar war begun when people were still firing muskets.

Follow Will Reach, a damaged ex-special forces alcoholic with nothing to lose; Sarah Li, one of Earth’s brightest minds trying to find her place in the stars; and Arthur, the enigmatic leader of the recruitment mission and commander of the flagship, Albatross.

But with inner demons, inter-species struggles, and self-doubt plaguing the human/ Lumenarian alliance, their ability to overcome the Forsaken looks increasingly grim as the battles loom near.

Connor Mackay is the author of numerous plays and screenplays as well as the award-winning first novel in the Albatross series, The Albatross: Contact. He is a wildland firefighter, carpenter, and traveller, but his true passion has always been writing. When not working on his books, he spends as much time as possible in the mountains reading, learning random new skills, or sitting around a campfire . . . which is usually also in the mountains.