Pin It
You are here: Home / Book Reviews / Non-Fiction / Activity Books, Journals, Day Timers / The Coolest Trucks in the World!

Combining coloring pictures of different kinds of trucks with interesting and fascinating facts about the main theme of the coloring book, is the greatest idea. Both fun and education, this is a must for every child and even for older readers.   -Amazon Review 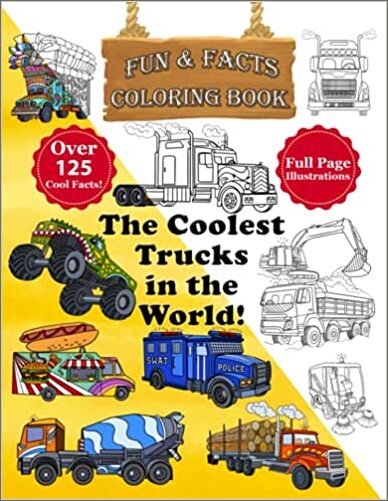 Do you know which truck is the fastest in the world?

Or the average height and price of a monster truck?

Which fire truck has two drivers?

And which one is the longest truck in the world?

Did you know that the first truck was invented 135 years ago?

Or that a garbage truck shreds and compresses garbage into its container to save space?

This book, from the We Can Color – Fun & Facts Coloring Books series, will provide long hours of fun and learning while coloring beautiful illustrations of amazing trucks for all kinds of purposes: racing, garbage collection, firefighting, launching missiles, construction, snowplowing, carrying containers, and serving sectors like logging, food, mining, the police and many more.

Next to every original illustration your child can color, there are interesting and cool facts about each vehicle: over 125 facts throughout the book!

* This book contains full page original coloring pages that are not repeated!

* All the illustrations are single-sided to prevent bleed-through and can be torn out and displayed without losing the images on the back!

* All the illustrations and information are suitable for ages 5 and up. Children, teens, and adults will enjoy relaxed moments while coloring and learning fun facts! 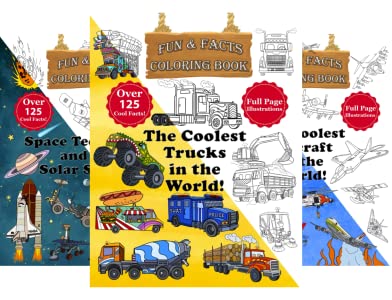 The We Can Color! series was created especially for you!

These 11 books cover topics that will interest anyone at any age: Dinosaurs, Vehicles, Aircraft, Space, and Animals from around the world in their natural environment: Farm, Jungle, Ocean, Savannah, Forest, and Desert!

Did you know that the most dangerous animal in the savannah is the hippopotamus? That the oldest koi fish lived to be 226 years old? That some goats can climb trees? And that the terrible T-Rex was not the biggest dinosaurs predator?

How big is the Sun relative to the Earth? What was the first man-made object to reach space? What is the fastest land animal? The tallest? The heaviest?

Did you know that scorpions glow in ultraviolet light? That male seahorses are the ones that get pregnant? That one of the astronauts lost his glove in space? That one of our planets was given its name by a girl in elementary school? And that there is an aircraft that takes off like a helicopter but flies like a plane?

Do you know the speed of the fastest truck in the world? Or how much the heaviest tractor weighs?

What is the price of the world’s most expensive fighter jet? How much does an Air Force One flight hour cost?

What is the most venomous snake in the world? The most venomous jellyfish? The most poisonous frog? And do you know how to distinguish between a mammal and a fish in the ocean? Or how to tell a jaguar from a panther?

Next to each one of the 330 original illustrations you can color, there are interesting facts: over 1,375 facts throughout the 11 books!

The We Can Color – Fun & Facts Coloring Books series includes the following books:

The Great Dinosaurs of the Earth!

Space Technology and Our Solar System!

The Coolest Aircraft in the World!

The Coolest Trucks in the World!

The Coolest Vehicles in the World!

The Great Animals of the Farm!

The Great Animals of the Ocean!

The Great Animals of the Jungle!

The Great Animals of the Savannah!

The Great Animals of the Forest!

The Great Animals of the Desert!

Daniel Gershkovitz was born in Israel in 1980. He holds a B.A. in Psychology and Criminology as well as a degree in Special Ed.

At the age of twenty-four, after a trip to fourteen countries, Gershkovitz published four successful children’s books and at the same time, began working at “Manof Youth Village”, established to provide youth at risk with a second chance in life.

In 2019, Daniel published four children books in the collection “We Can Do It”.

In addition to his fourteen children books, Daniel is also the creator of the series “We Can Color – fun and facts coloring books”, eleven coloring books with 330 original illustrations and 1500 cool facts about dinosaurs, space, aircraft, vehicles, and unique animals from the ocean, farm, forest, desert, savannah, and jungle.

Check out ALL the coloring books in the collection … there is something for everyone!