Pin It
You are here: Home / Book Reviews / The Cracklock Saga: Book 1 Fae or Foe?

This book dances on the edge of YA/Adult fantasy and would be an excellent read for so many! I loved the story, and the characters endeared themselves to me- especially Dorcas! I definitely recommend this, and think the next two books are going to be even better. – Amazon Review 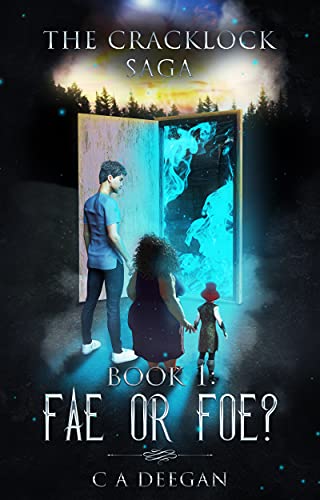 No one would want to kill a Faery, surely?

Jack Crackley wouldn’t; teenagers don’t believe in such things. There are plenty of other things to worry about; his mum, jobs, school, the local bullies, not to mention some weird disease that’s affecting young children the world over.

However, things are never as they seem. Little eyes watch out for him whilst bigger ones seek him for their own ends. There’s a hidden world out there, and its inhabitants are in serious danger. Jack is going to have to get to the bottom of it all before it’s too late. And that’s a tall order when you have no idea who you really are…

A fantasy adventure like no other, where worlds collide and the monsters are not only from make believe. Things are going to get complicated. It’s a good job our brownie knows how to throw a punch.

C A Deegan lives in the East Midlands, right in the centre of the UK, and when he’s not writing or working, he’s with the family or walking the dog in the local woodlands with half an eye out for those ever-elusive Fae.

The “Cracklock Saga” series of books came about from reading some pretty awful fairy books to his children over the years . But as he ground his way through these with gritted teeth, he always wondered what would happen if someone didn’t like fairies, what they would do about it, and could anybody stop them? This idea grew, and the Cracklocks were born. And boy, were they scary!