Pin It
You are here: Home / Book Reviews / Fiction / Adventure / The Crossing Point 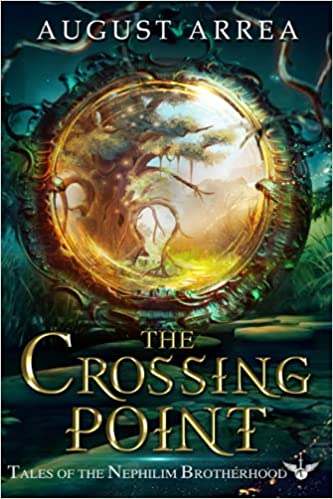 The Crossing Point
(Tales of the Nephilim Brotherhood)

It’s hard enough for a teenager to navigate through his high school years without having to deal with a sudden, unexpected physical change, like say, two pronounced humps protruding from one’s upper back. Now, imagine finding out such an oddity wasn’t just some cruel courtesy of nature, but actually a pair of wings growing just beneath the skin.

For Jacob Parrish, this is only the beginning of a sequence of events he suddenly faces after the death of his beloved mother, and he is visited by a mysterious visitor clad in a long, dark overcoat with eyes the color of two golden suns, who not only reveals himself to be an angel (and a fallen one at that), but informs the boy that he is the son of an angel. Naturally, the revelation is met with disbelief until his grandmother reluctantly brings forth a box, secreted away inside an old trunk, that holds the unbelievable truth long kept from Jacob — that he is indeed, a Nephilim.

So begins Jacob’s astonishing journey as he embarks on an incredibly perilous adventure with the mysterious Gotham as his guide. Traveling to the other side of the world, a Gate, hidden in the shadows of an ancient Turkish church, leads the way to a mystical world, where Jacob discovers a treasure trove of abilities he never knew he possessed. While struggling to find the answer to a question purposefully kept from him that has plagued him since he was a small boy, he discovers his birthright and an unforeseen destiny that will change our world.

August Arrea avoids the spotlight with the same aversion as a vampire does to the sight of the approaching dawn. As a 3rd generation American of European decent, he also has had the good fortune to be born with a name with strong ties to history and cultural heritage over many generations. On the other hand, such names can be a real chore since they are typically an alphabet soup of what often appear to be conflicting letters that don’t seem to belong, sprinkled with connecting vowels. As such, he has had to, at times, spend a wearisome part of his life correcting what seemed to be a never ending mass of people, unable to pronounce, spell or even translate his name correctly; even on official documents. For these two reasons, during the process of turning his attention to writing this series of books, he has embraced the christening and adoption of this new and simple pseudonym.

Moniker aside, over the course of the last 25 years, this limelight dodger with a “speed bump” for a name, first made his mark writing as an award-winning journalist who loved uncovering the gems of stories hidden in plain sight on Any Street, U.S.A. He eventually turned his skills of mining for stories by drilling into the unexplored caverns of his imagination; the ‘Tales of the Nephilim Brotherhood’ series is comprised of the core samples of his quarry expedition.

Today, he is still a working journalist by trade with a national newspaper company. He lives in California’s central valley where spotlights are rare, but the butchering of his name remains an inescapable, yet pardonable occurrence. When he’s not writing, you’ll likely find him with his best girls: two Australian Shepherd sisters named Gracie and Ember with whom he has absolutely no shame in readily admitting he engages in baby talk and the occasional slobbery smooch on the lips.