Pin It
You are here: Home / Book Reviews / The Cupid Chronicles

This book presented a highly enjoyable blend of science fiction and fantasy reminiscent of the original twilight zone television series. The characters in this book were presented with originality and such careful detail, so that the reader can mentally visualize the events in this wonderful series of short stories. I highly recommend this book and look forward to future books from this author whose talent should be considered comparable to that of a 21st Century Rod Serling. – Amazon Review 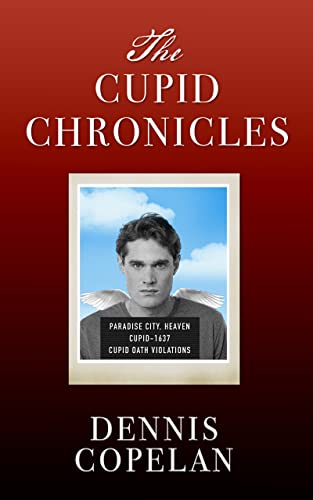 Heaven is a busy place, especially for a social worker and angel-in-training, Pixel Millet, who works in the Paradise City Department of Discipline. When he receives a red folder containing violations of The Cupid’s Oath by unruly Cupid-1637,

Pixel must advocate and defend him from being “flushed” to the lower regions. Pixel has one day to interview his client, review eight often funny and sometimes poignant romances mismanaged by Cupid-1637, and devise a defense to present before the administrative hearing.

But, unfortunately for Pixel, he soon suspects someone higher up is rigging the outcome against them. And once he gets closer to the truth, it threatens to upset the foundations of heaven forever.

Dennis Copelan grew up in Beverly Hills, California. His father, Jodie Copelan, was an award-winning film editor, who inspired him with his love of Hollywood and the movie industry. Dennis was a comic book connoisseur (i.e. geek) before it was fashionable and still secretly reads them along with his favorite authors, including Robert Sheckley, Kurt Vonnegut and Philip K. Dick.

He is the author of The Greatest Stories Never Sold, a collection of humorous short stories, sitcoms and screenplays. He lives in Irvine with his wife Judi, son Josh and a golden retriever named Shasta.