Action packed, smart, and lots of gore, fans of the zombie / post-apocalypse genre will enjoy this book. It clips along at a good pace, and really heats up when the main characters are forced to leave their safe haven and battle multiple foes. This is a short / fast read, perfect for a fun break from reality.  -Amazon Review 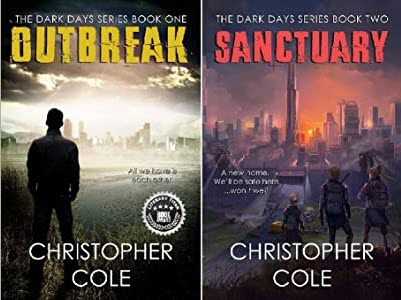 Cities are bombed out ruins and wilderness is humanity’s new home. The undead roam the earth, and the new world order is about the struggle to survive. Sonny Daniels begins an emotional and physical journey of personal survival and protecting those he loves.

While survival is a constant struggle, Sonny’s most desperate fight is the struggle preserve some semblance of a compassionate soul. Sonny and his parents are caught in the zombie outbreak in upstate New York. After the passage of the first year, their base is attacked by bandits and their safety has again been compromised. Fearing for their loved ones, Sonny’s parents send him and his orphaned childhood friends, Ashley and Carrie, to Fort Denver Colorado on a military plane.

When Fort Denver is overrun with zombies, the three are alone in a zombie-infested wasteland without the army’s protection, forced to rely upon one another and a handful of equally desperate survivors they encounter along the journey. Sonny is determined to do whatever it takes to protect Ashley and Carrie while finding a safe place to call home, but survival can force you to make dark decisions.

In the midst of looking for sanctuary in the badlands, Sonny and his friends make it to Fort Gold Rush. A militarized city providing protection from the zombies and predators beyond its walls.

However, the military leaders recognize the city’s safety as a sanctuary is only temporary unless they train the next generation of defenders. It’s there that Sonny is introduced to Grim, an unlikely anti-hero who becomes the singularly most important influence in Sonny’s life. As he and his friends adapt to their new life, they are conscripted to train rigorously as the city’s soldiers and defenders in competing units.

This second installment in the Dark Days series shows there are significantly more lessons awaiting Sonny and his friends than just learning to be lethal fighters.

Christopher Cole, I was born in Seattle, but raised in North Carolina since I was eight. I started work on the novel when I was nineteen while living in Wrightsville Beach, North Carolina. The novel developed into a series as I continued to develop the plotlines and characters. When not writing, I work as a welder in the Raleigh, NC area. I’m a welder and a writer, because I love working with my hands and creating a story. Writing is a lost art that I enjoy. The ideas I come up with are found when I found myself enjoying the beauty of this world like long walks on the beach or watching the sun set. I’m very new to being a published author. I care deeply about plot and characters which I believe are what make a story great.