Pin It
You are here: Home / Book Reviews / Fiction / Adult Fiction / The Dragon Hunter and the Mage 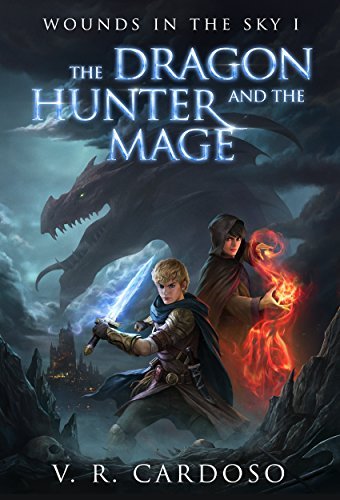 Magic will make you invincible. If it doesn’t kill you first.

In a world where magic is punishable by death, brothers Aric and Fadan stumble upon a mysterious, ancient book – A Manual of Magic. They are faced with a choice: take the book straight to the Emperor or see if one of them has the forbidden magical Talent. A decision that will change their lives, and the Empire itself, forever. The brothers are swept away, sent to opposite ends of the world, one to train as a Dragon Hunter while the other taps into magical powers that could spell his execution.

Dark forces are moving in the shadows, and while the nobility whispers of rebellion, an ancient evil, long thought gone, is about to awaken. Can Aric and Fadan save the Empire? Will they survive to ever see each other again?

V. R. Cardoso, I remember writing short stories on my dad’s old Mac SE 30. He would then print a few copies at the office so I could distribute them to my class. This was in elementary school. I mostly ripped off everything that I read or watched. I remember having a hero that was suspiciously similar to Indiana Jones, except his name came from a book cover standing on the shelf behind the computer.

I grew up on a healthy diet of fantasy novels, video games and daydreaming. After graduating in business, I spent a few years cranking out headlines, scripts and silly ideas in an advertising agency in Lisbon. Having written about pretty much everything, from laxative pills to car insurance, I decided it was time to start writing about what I truly enjoy. So I’ve taken the plunge and I’m now self publishing my works of fiction.

I also eat a lot of crepes.