Pin It
You are here: Home / Book Reviews / The Girl Drank Poison

Throughout the story Blenman weaves a tangible fantasy world that leaves the reader hungry for more adventure. The story follows Horace, a shopkeep with a secret storied past, and Griever the ferrelf, an eager ferret like humanoid with a monstrous magical arm, as they strive to stop Zellin, a barmaid turned love monster, before she destroys ghe town of Sleeping Bear. The story is full of compelling characters, each with their own faults and quirks, but Griever is by far my favorite. With almost innocent curiosity for the world and a flitting attention span, she is a delight to follow through the story as she frustrates Horace with her banter. Her personality makes it absolutely clear that she is part ferret. I look forward to reading more of Blenman’s work. – Amazon Review 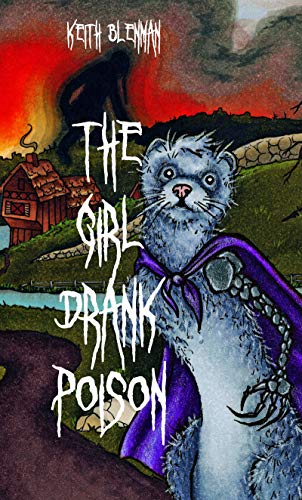 A magic potion may spoil; its intended effects lost to time. The power of a potion, however, never fades. It contorts, deforms, and mutates, often leading to something monstrous. Thus tragedy befalls Zellin Percour, a young woman tricked into drinking an expired love potion. Now, transformed into an abomination, she’s rampaging her way toward the town of Sleeping Bear, hellbent on finding the man who deceived her.

Horace is enjoying his quiet life. He loves his wife, his children, and his shop in Sleeping Bear. He’s grateful that his violent past is buried deeper than the bodies left in his wake. But when a fool leads disaster to his door, he must revive his lethal talents or risk losing everything.

Griever wields a weapon of untold power. She’s also only two feet tall. This makes her both the deadliest and most easily overlooked bounty hunter in the world. She’s caught the scent of her hero, legendary pirate Lorenzo Blade, and is eager to discover if the man lives up to his myth. Her trail leads her to Sleeping Bear, where she’s about to discover all manner of hell lying beneath the surface.

Keith Blenman (1980 – ) hails from Metro Detroit. He teaches forensic analysis, works as a compliance coordinator in retail, and independently publishes fiction. He is short, chubby, and heavily tattooed.