Pin It
You are here: Home / Book Reviews / The King’s Mirror

We see a young hero arise, ready to defend the kingdom, through whatever means necessary, but not all that glitters is Gold as we see secrets come to light, secrets that are best kept in the dark….   The King’s Mirror, A Read that takes you to the time when creatures walked on the earth, a time where brothers rise against each other and to gain power and influence over others.   -Amazon Review 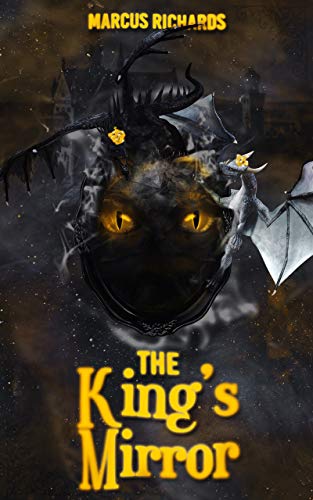 The King’s Mirror is an epic fantasy fiction book about ordinary people being thrusted into extraordinary circumstances. This masterpiece blends a grand adventure, deep reflections, action, and dire peril. With a dose of political intrigue, a generous dollop of romance, and a pinch of humor.

The aftermath of the Dragonkin War and the death of King Freanald leaves brothers Konrad & Ernold fighting over the throne. Despite not being the senior sibling, Konrad uses his power and authority to banish his brother Ernold from the kingdom despite attempts from Luna who tried to stop it from happening.

Fifteen years later, Ernold who was banished for his crimes against his brother returns to Edilide with an army of beasts who are absolutely fearless. Sowing chaos and destruction in his wake, he kidnaps his brother’s daughter, Princess Luna, from the capital making his way to Wellshade, the land of eternal darkness.

With the lands of Edilide now in a state of tension & unrest, a young man, Sorrin, will embark on a journey from the Monastery he calls home. He and his companions seek to stop the threat of again looming war. However, things are not as they seem with dark truths coming to light.

Marcus Richards is a writer who grew up in Louisiana, which considering where you’re reading this, makes perfect sense. He’s a fan of fantasy and adventure books. He wanted to put his own ideas on the fantasy genre for the readers of today. I’m not used to writing these in the third person but its about time you learn a bit about myself and what inspired me to get into the world of writing.

What inspired me to get into the world of writing was reading various books during junior high and high school. Also watching various movies and television shows helped as well. Although I did all that, I truly didn’t start writing until I was in my freshman year of college just out of boredom one day. I figured I would give the writing thing a chance and it turned out that writing relaxes me and I could also write out things I couldn’t just say out loud. It felt easier.

The King’s Mirror is a standalone book but I hope to be able to write more books in the future for many people to enjoy mu style of writing.