Pin It
You are here: Home / Book Reviews / Fiction / Adventure / The Manhattan Swindle

Only 99cents on Kindle until November 11th. 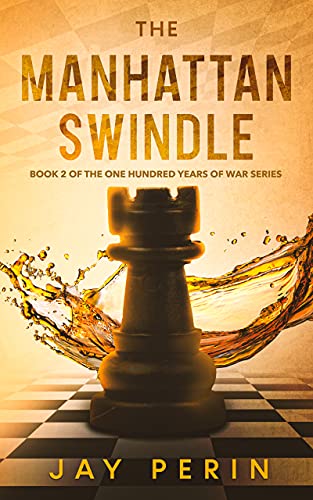 The Manhattan Swindle
(ONE HUNDRED YEARS OF WAR Book 2)

A SINGLE LIE COULD WIN THE WAR WITHOUT SHEDDING A DROP OF BLOOD.

The chaotic ’eighties… political assassinations, drug wars, the computer revolution… Jared Sanders, the criminal oilman, is inches away from controlling the White House. His old nemesis, Senator Temple, stands in the way. This time, the senator is not alone.

The heirs of the three oldest clans in the oil business join Temple. An aspiring lawyer with her eye on a supreme court seat, a Navy SEAL with a target on his back, and a dashing blueblood from New York City. Together, they could defeat the enemy without firing a single shot. Except, the lies which thrust them into the alliance, the family secrets, refuse to stay buried.

Three dynasties, a ruthless adversary, a long conspiracy… from the hallways of the West Wing to the pages of tabloids, from Lebanese towns to Argentine oilfields, The Manhattan Swindle continues the riveting saga of treachery, heartbreak, vengeance, and blood feuds.

For more information, including family trees and maps visit Jay Perrin on his website.