Only 99cents on Kindle until May 17th.

Phyllis writes so beautifully, for one. Her love of language, whether English or German, jumps off of the page and into your mind with such ease, you don’t even feel as though you’re reading. She speaks to you. Her characters become your friend, even the subject of the novel, Eva Braun, which is absolutely frightening. That I should feel any sympathy with a woman who was romantically involved with one of the most heinous human beings ever to be brought into this world is disturbing to me. Which is one of the reasons why this book is so important. ~ Amazon Review 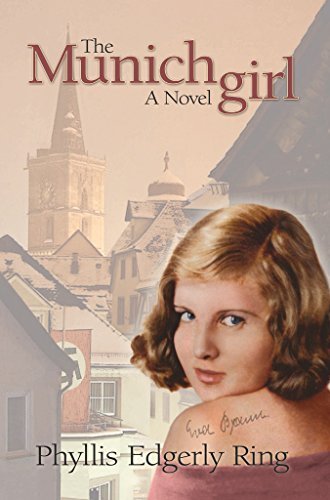 The Munich Girl:
A Novel of the Legacies that Outlast War

Anna Dahlberg grew up eating dinner under her father’s war-trophy portrait of Eva Braun.
Fifty years after the war, she discovers what he never did—that her mother and Hitler’s mistress were friends.

The secret surfaces with a mysterious monogrammed handkerchief, and a man, Hannes Ritter, whose Third Reich family history is entwined with Anna’s.

Plunged into the world of the “ordinary” Munich girl who was her mother’s confidante—and a tyrant’s lover—Anna finds her every belief about right and wrong challenged. With Hannes’s help, she retraces the path of two women who met as teenagers, shared a friendship that spanned the years that Eva Braun was Hitler’s mistress, yet never knew that the men they loved had opposing ambitions.

Eva’s story reveals that she never joined the Nazi party, had Jewish friends, and was credited at the Nuremberg Trials with saving 35,000 Allied lives. As Anna’s journey leads back through the treacherous years in wartime Germany, it uncovers long-buried secrets and unknown reaches of her heart to reveal the enduring power of love in the legacies that always outlast war.

I understand this is a fictional book, but the huge amount of detail shows that the author did extensive research on the life of Eva Braun. I thought I knew a great deal about this period in history, but I learned a lot more in this book. The fictional parts were woven in seamlessly and it flowed from beginning to end. I loved it. This is the first book I’ve ever read that features Hitler’s mistress, and although I found it difficult to relate to anyone who could even like such a person but the author has portrayed her character with so much pathos I found myself caring about her.  -Amazon Review

As she writes fiction and nonfiction, Phyllis Edgerly Ring watches for the noblest possibilities in the human heart. She’s always curious to discover how history, culture, relationships, spirituality, and the natural world influence us and point the way for the human family on our shared journey.

Her newest novel, The Munich Girl: A Novel of the Legacies That Outlast War, traces a pathway of love and secrets in WWII Germany when protagonist Anna Dahlberg discovers that her mother shared a secret friendship with Hitler’s mistress, Eva Braun. Her journey to discover the truth about this, and her own life, will challenge most every belief she has about right and wrong.

The author has worked as writer, editor, nurse, tour guide, program director at a Baha’i conference center, taught English to kindergartners in China, and served as instructor for the Long Ridge Writer’s Group. She has written for such publications as Christian Science Monitor, Ms., Writer’s Digest, and Yankee, and also published several nonfiction books about creating balance between the spiritual and material aspects of life.

More information can be found at her blog, Leaf of the Tree: https://phyllisedgerlyring.wordpress.com/

Each visit had its own rhythm and pace. The first, in the spring of 2010, was a kind of mad-rush count-down to get through them all before the Archives’ five o’clock closing time. This involved leaving at least 15-20 extra minutes on each end for passing through security, checking in or out,and depositing or retrieving my belongings from a locker.

I couldn’t take so much as my own pencil into the resource room where her albums are housed in several piles of volumes hard-bound in dark blue. Overwhelmed as I encountered them for the first time, I was attempting to encompass 33 years of one life in the equivalent of two afternoons.

Years of reading and research later, including interviews with some of those who met the subject of my search, my approach on the second visit was more like forensics. I was watching, among those several dozen books of her photos, most arranged quite haphazardly with little attention to chronological order, for patterns and connections that form a larger picture.

There are many photos whose settings and significance I could spot more readily, based on who was present, clues in the background of interiors and landscapes, even the clothes people were wearing.

But it was that most-elusive quarry that I was watching for — the evidence of the emotional side of things. By the time I made the second visit, the years that I’ve spent following the trail of this life, as my novel’s protagonist does, have led somewhere deeper. In much the way I can with photos of those whom I know, I can tell when a day was a joy, or a strain; when a smile was a spontaneous response, or a tight, forced mask.

Seven years onto this trail, I trolled those hundreds of images, watching for the signs of where the shifts came. Watching for those large and little junctures at which a life was repeatedly bartered away in the shadow of another, to the detriment of its self.